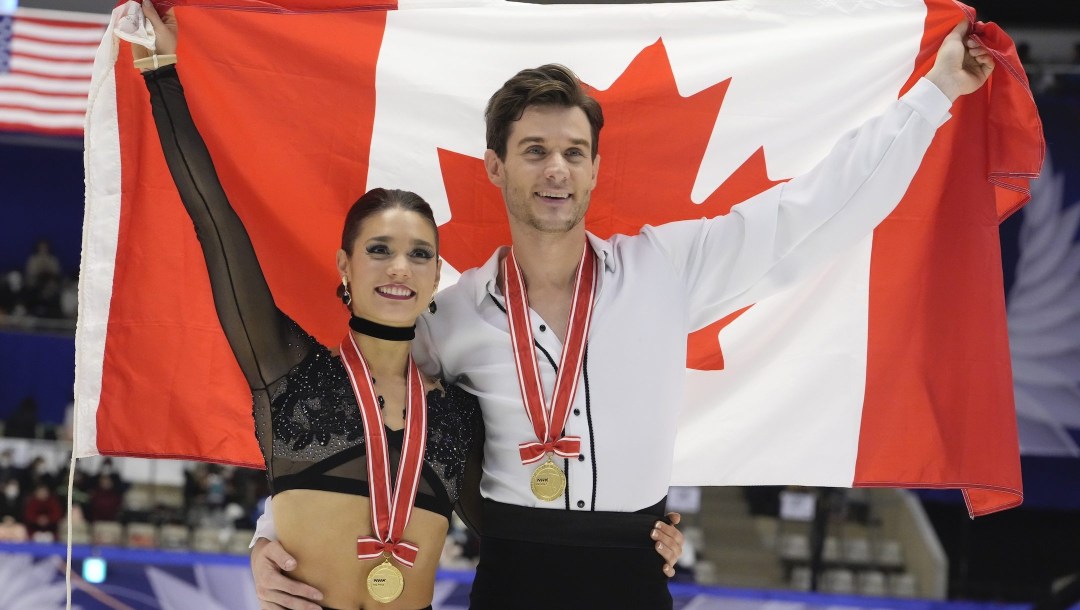 It was a weekend filled with first time victories and milestone moments for Team Canada athletes.

A first Grand Prix gold for an ice dance duo, a first World Cup win for a rising star of long track speed skating, and a first time winner on the PGA Tour were just a few of the highlights.

Here’s a look at the details and a few other results you may have missed:

Ice dancers Laurence Fournier Beaudry and Nikolaj Soerensen won their first ever gold medal on the ISU Grand Prix of Figure Skating series when they claimed victory at NHK Trophy in Sapporo, Japan on Saturday. They set personal bests in the rhythm dance (85.66), free dance (124.75), and total score (210.41) to stand atop the podium. It was an upset victory as they defeated three-time world medallists Madison Chock and Evan Bates of the United States.

The win comes two weeks after they won silver at the Grand Prix de France and they are qualified for next month’s ISU Grand Prix Final for the first time in their careers.

In the pairs event, Brooke McIntosh and Benjamin Mimar celebrated their first Grand Prix medal. They finished with 175.65 points (also a personal best) to claim the bronze medal in just their second ever Grand Prix start. They placed fourth at Skate Canada International at the end of October.

The sixth and last Grand Prix event of the fall will take place this coming weekend in Espoo, Finland. Piper Gilles and Paul Poirier will be looking to lock up their own spots at the Grand Prix Final. Keegan Messing and Madeline Schizas are also among those competing

Long Track Speed Skating: Moving on up the podium 👍

Canadian athletes skated to a total of five medals at the second stop of the ISU Speed Skating World Cup in Heerenveen, Netherlands.

After starting the season with silvers last week, Laurent Dubreuil and Connor Howe both upgraded to gold. Dubreuil got his first victory of 2022-23 on Saturday in the men’s 500m. Howe followed on Sunday with a win in the men’s 1500m. It is the first career World Cup gold medal for the 22-year-old.

On the women’s side, Isabelle Weidemann skated to the silver medal in the women’s 3000m. On Friday, Ivanie Blondin took third place in the women’s mass start. She then teamed up with Brooklyn McDougall and Carolina Hiller to take home silver in the team sprint.

There’s a short break in the schedule before the World Cup circuit continues in Calgary on the weekend of December 9-11.

Canadian golfer Adam Svensson can call himself a PGA Tour winner. He closed with a 6-under 64 to win the RSM Classic on Sunday at Sea Island Golf Club in Georgia. With his first career tour victory, he secured a spot in the Masters and a two-year exemption. It’s quite the comeback for a golfer who lost his PGA Tour card after the 2019 season.

On the LPGA Tour, Brooke Henderson tied for seventh after carding a 72 on Sunday at the CME Group Tour Championship in Naples, Florida. This is her 10th top-10 finish of 2022 to conclude the season.

Canadian cyclists won three medals at the second round of the UCI Track Champions League in Berlin, Germany.

Kelsey Mitchell picked up the first victory in an exciting women’s keirin after consulting a photo finish. She edged out Colombian Martha Bayona by 0.001 seconds to take the gold medal. Mitchell sits second in the overall women’s sprint standings.

There were two Canadians on the podium in the men’s elimination race. Dylan Bibic won the gold while Mathias Guillemette claimed the bronze. Guillemette is the current overall leader of the men’s endurance standings heading into Saturday’s third round in St-Quentin-En-Yvelines, France — the Olympic venue for Paris 2024.

Jérémy Chartier made his mark at the FIG Trampoline Gymnastics World Championships in Sofia, Bulgaria as he finished fifth in the men’s individual final on Saturday. His score of 57.820 points left him just 0.66 out of the bronze medal position. The 21-year old was competing in just his third senior world championships. He had been ranked third in the first qualification round and placed second in the second qualification round to get into the eight-man final for the first time at the worlds. Rémi Aubin also advanced to the men’s individual final, but he could not finish his routine and finished eighth.

Sophiane Méthot and Sarah Milette finished fifth in the women’s synchro trampoline, which is not an Olympic event. Milette just missed advancing to the women’s individual final, ranking 10th in the second qualification to be the first reserve.

Ashley Kraayeveld, Jordan Stewart and Nicholas Hoefling all reached the quarterfinals in their respective weight classes at the World Taekwondo Championships in Guadalajara, Mexico.

As the second seed in the women’s 62kg event, Kraayeveld received a bye through the first round. After being victorious in the Round of 32 and Round of 16, she came up short against Feruza Sadikova of Uzbekistan in the quarterfinals to finish tied for fifth overall.

Stewart was seeded eighth in the men’s 87kg weight class. After his opening round bye and two match victories, he ran into Serbia’s Mehdi Khodabakhshi — the eventual world champion — in the quarterfinals.

Hoefling had a similar experience in the men’s 54kg event, taking a loss against eventual silver medallist Cesar Rodriguez of Mexico in the quarterfinals.

Freestyle Skiing: Start of the season on the slopes 🎿

At the first slopestyle event of the FIS Freestyle World Cup season, Megan Oldham just missed the podium, finishing fourth. Her score of 75.42 left her just 1.16 points out of the bronze medal position in Stubai, Austria. Brynn Johnston also advanced to the eight-woman final, while Olivia Asselin missed it by one spot, placing ninth overall.

The top Canadian man in Stubai was Max Moffatt, who finished seventh. Evan McEachran finished 11th in the 16-man final.

After multiple cancelled races, the 2022-23 FIS Alpine World Cup season finally got underway for the women this weekend with two slalom races in Levi, Finland. Two-time Olympian Laurence St-Germain placed ninth on Sunday with a two-run total time of 1:54.22. It is her 12th career top-10 finish in a World Cup slalom, three of which have come in Levi. Ali Nullmeyer had been the top Canadian on Saturday when she finished 14th.