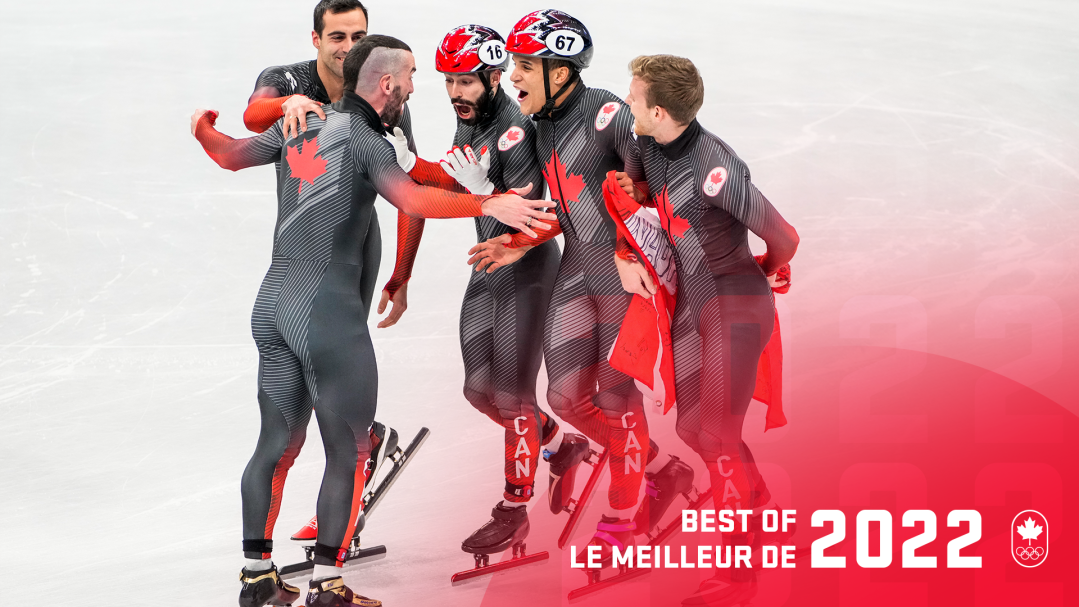 Since short track speed skating’s Olympic debut three decades ago, Canada has always been able to count on having skaters who could bring home medals from the biggest competitions in the world. Some of those skaters are among Canada’s most successful Olympic athletes.

That group of legends includes Charles Hamelin, who at Beijing 2022 became Canada’s most decorated Winter Olympian. After his fifth Olympic appearance and having served as the leader of the Canadian short track team for over a decade, Hamelin retired from competition at the end of the 2021-22 season.

Despite his departure, the future of short track speed skating in this country is in good hands, as many of his teammates — including Steven Dubois, Pascal Dion, and Kim Boutin — already have several momentous accomplishments to their credit.

Several months before the 2022 Olympic Winter Games, Hamelin announced that he would be hanging up his skates at the end of the season. Before he even set foot on the ice in Beijing, he received his first honour as he was named Team Canada’s co-Opening Ceremony flag bearer alongside women’s hockey captain Marie-Philip Poulin.

The skater took advantage of his last appearance on Olympic ice to add one last medal to his collection. Teaming up with Steven Dubois, Pascal Dion, Jordan Pierre-Gilles and Maxim Laoun, they won gold in the men’s 5000m relay for Hamelin’s sixth career Olympic medal.

At 37 years old, Hamelin became the oldest short track speed skater to ever win an Olympic medal. He was also the first male short tracker to win a medal at five different Olympic Games.

This fourth and final Olympic gold medal marked the end of an exceptional run for the man nicknamed the “Locomotive de Sainte-Julie”.

Though his days on Olympic ice were behind him, Hamelin strapped on his skates one last time at the 2022 World Short Track Speed Skating Championships in Montreal. With friends and family present, he raced in the men’s 5000m relay on the final day of competition. Surrounded by the teammates he medalled with in Beijing, he won his 38th world championship medal as the Canadians took bronze.

Before saying goodbye to the ice on which he had trained for much of his career, he took one last lap with his daughter Violette in his arms. A tearful and triumphant end to an illustrious career!

Steven Dubois: A medal of each colour for his collection

Even without Hamelin, Canada can count on a few skaters who are more than familiar with international podiums. Among those who also plan to leave their mark is Steven Dubois.

At Beijing 2022, he took home three medals to be one of two Canadian triple medallists at the Games, along with long track speed skater Isabelle Weidemann.

In addition to the 5000m relay gold, he won silver in an action-packed 1500m final that featured 10 skaters, after Dubois and three others had been advanced to the A final following the assessment of penalties.

Days later, he won the 500m bronze medal. “Definitely can’t say I had expectations for a certain number of medals, but it has definitely been higher than what I expected,” confirmed Dubois.

It was quite a reversal of fortunes for one who was an alternate for the 2018 Olympic team. However, far from discouraging him, the role he played four years ago had a positive impact on his progress: “I felt like what I did the whole year was a small part of what they [the PyeongChang team] achieved. So I think it helped me motivate myself to get where I am right now and for that I have to thank the last Olympic team and everyone who was there for the past four years.”

After winning the relay gold medal, the new star of Canadian short track said that Hamelin has had a positive influence on him.

“Charles has always been very welcoming to the new skaters. He made me feel like family and most importantly, he showed me how to work at training, even if you’ve achieved great things, to not settle and think that you’ve done it all.”

It’s been a learning experience that suggests the future is still brighter for Dubois.

Pascal Dion: Vice-champion of the world

While Dubois was an Olympic alternate four years earlier, Dion had been right there with Hamelin in winning relay bronze at PyeongChang 2018. After winning his second Olympic medal in Beijing, he had a big breakthrough at the world championships in Montreal.

Dion won his first individual world medal, silver in the 1500m, and finished first in the 3000m super final. That was enough to secure him second place in the men’s overall classification. Along with his relay bronze, it was truly a spectacular showing.

The star of PyeongChang 2018, where she won three medals, Kim Boutin is also a frequent occupant of the podium. At Beijing 2022, she added another Olympic medal to her collection when she won bronze in the women’s 500m.

The result itself may have been a repeat from four years earlier, but it came under much different circumstances.

In 2018, Boutin had been subject to threats and cyberbullying from South Korean fans who didn’t like that she had been bumped onto the podium after Choi Minjeong’s disqualification for colliding with the Canadian. They stripped the moment of joy and replaced it with fear.

This go around, Boutin was able to fully enjoy her time on the Olympic podium.

“I really came into this competition with the goal of being one with the ice and letting go of all the emotions that would come with it. The last Games were very emotional and difficult for me …. I wanted to take it step by step.”

READ: Boutin picking up where she left off at Olympic Games

This bronze medal also helped alleviate pain from years of doubt. Although the skater has had a lot of World Cup success in recent years, Boutin has also had to overcome her share of challenges.

The now four-time Olympic medallist kept adding to her list of accomplishments at the Worlds in Montreal where she won five medals and finished second in the women’s overall classification.

Although the retirement of the legendary Charles Hamelin will undoubtedly leave a void, the future is certainly bright for Canadian short track speed skating.