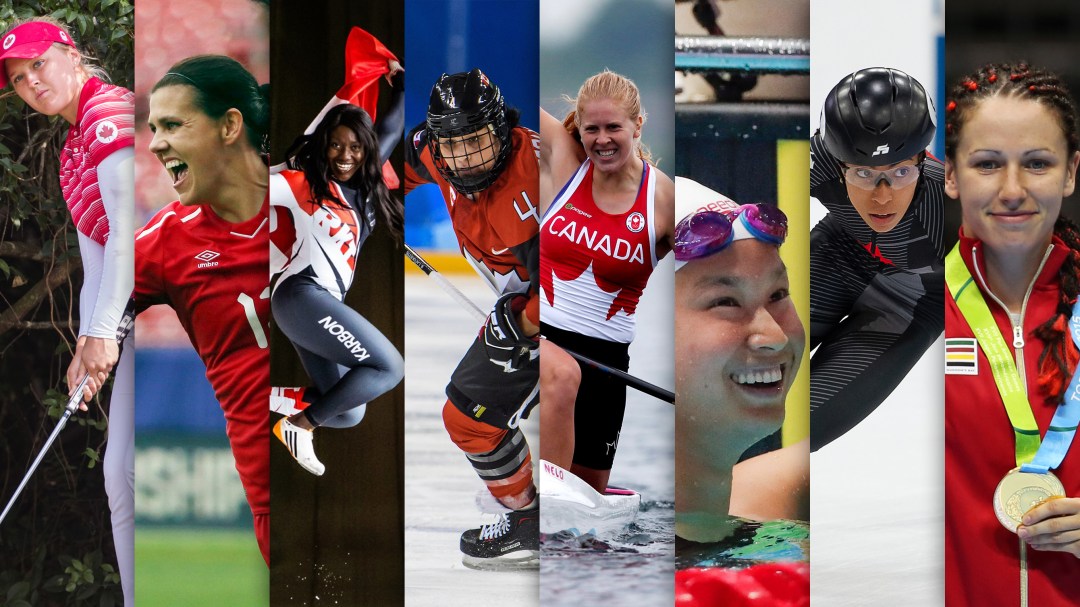 Each year on March 8, the world marks International Women’s Day as part of the fight for gender equality around the globe.

The theme of the day for 2021 is Choose to Challenge, a decision we can all make individually to celebrate women’s achievements, raise awareness against bias, and take action for equality.

We’re proud to honour some of Team Canada’s Olympic hopefuls for Tokyo 2020 and Beijing 2022 who are doing inspiring things off and on the field of play. Here’s a quick introduction to just some of the amazing women who wear the maple leaf around the world:

Celebrating those challenging for a more inclusive world

Throughout the past year, we’ve seen Team Canada athletes speak up and speak out and take action to challenge everyone on some truly important social issues.

Separately and together, rugby sevens stars Pam Buisa and Charity Williams have made sure their voices are heard in the fight against anti-Black racism. They’ve also dedicated their platforms to empowering other voices in support and become organizers in the Black Lives Matter movement.

Natalie Achonwa was honoured for her work as a community leader with the WNBA’s Dawn Staley Award in 2020. Hosting “Nat Chat” on her social media channels, she gave a platform for people to discuss issues surrounding mental health and racial injustice.

Sprinter Khamica Bingham co-founded Meet My Melanin, an organization that educates on racial inclusivity, inspires through motivational speaking, and hosts events to help community and disadvantaged youth to be seen and heard.

As an ambassador for the LGBTQ+ community, Annie Guglia has encouraged inclusivity within skateboarding and become an inspiration for many girls to reach for their goals despite intimidating stereotypes.

So many Canadians – Marie-Philip Poulin, Sarah Nurse, Brigette Lacquette among them – have made strides to increase the visibility of women’s ice hockey. In late February, the puck dropped on the second season of the Professional Women’s Hockey Players’ Association Dream Gap Tour, a continuation of the players’ objective to advance equity and opportunity within women’s sports.

Snowboarder Spencer O’Brien has used her voice and platform to advocate for Indigenous communities. She is a founding ambassador for the N7 Fund, which supports Indigenous youth through sport.

Celebrating those challenging for a more inclusive Olympic program

With each Olympic Games, the number of male and female athletes grows ever more balanced. But the addition of more women’s events doesn’t just happen. It’s a result of the athletes who compete in those sports pushing for their inclusion and showing they’re ready for the world’s biggest stage.

When women’s canoe events are contested at Tokyo 2020, it will be partly due to the strong voices and great athleticism of paddlers such as Haley Daniels, Katie Vincent and Laurence Vincent Lapointe who challenged the status quo.

Read: Haley Daniels: Proud to be a pioneering paddler and daughter of a transgender dad

A two-time Olympian in ski jumping, Taylor Henrich is now competing in Nordic combined – the last male-only sport on the Olympic program – on the World Cup circuit, a crucial step on the road to gender equality at the Winter Games.

Caitlin Nash and Natalie Corless made history in December 2019 when at just 16 years old they became the first female team to compete in a World Cup luge doubles race against a field full of men. Though the event is technically open, only men have competed at the Olympic Games – unlike the 2020 Winter Youth Olympic Games which had a girls’ event in which the Canadians captured silver, showcasing their potential.

Celebrating the best in their biz

It’s time to shine a spotlight on the women of Team Canada who have achieved superstar status within their sports because of what they have accomplished on the field of play, inspiring so many others to pursue their own dreams.

Three-time Olympian Jennifer Abel is the most decorated Canadian ever at the FINA World Championships. In 2019, the diver won her 10th career medal when she and François Imbeau-Dulac won silver in the mixed 3m synchro event.

Brooke Henderson swung into the Canadian history books in June 2019 when she earned her ninth career LPGA victory – a pro tour record for a Canadian golfer, male or female. 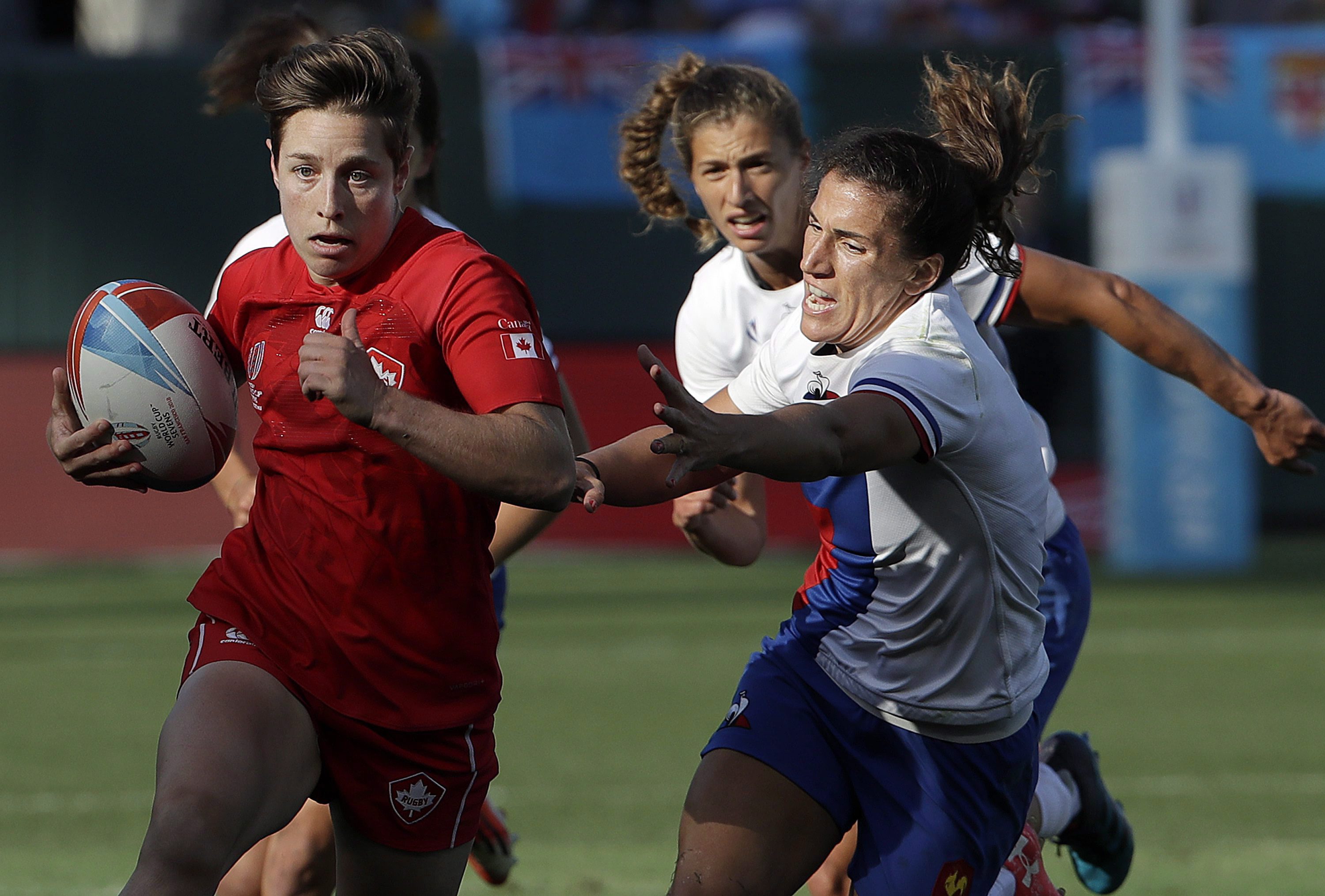 Christine Sinclair confirmed her status as greatest of all time when she scored her 185th international soccer goal – the most all-time by a man or woman.

Canada won eight medals in the swimming pool at the 2019 FINA World Championships – all of them in women’s events. Penny Oleksiak and Kylie Masse became the first Canadian female swimmers to earn five career medals at the Worlds. Margaret Mac Neil defeated the reigning Olympic champion and world record holder to win a world title.

Ellie Black made history in 2017 when she became the first Canadian artistic gymnast to win an all-around medal at the world championships. She came close to standing on the podium again in 2019, finishing fourth in the all-around.

Breaking badminton barriers in Canada, Michelle Li hit an all-time high for the country when she was ranked eighth in the world in early 2020. Competing in a sport that doesn’t get a lot of recognition at home, she’s inspires so many as she goes after goals.

Celebrating the women to watch

These Canadian women are on the rise in their sports, so you’re gonna want to keep an eye on them as they continue to make strides.

Within two years of her first ride on a velodrome, Kelsey Mitchell became a world record holder, Pan American Games champion, and World Cup medallist in track cycling. Did we mention she’s been nominated to the Olympic team for Tokyo 2020?

They’ve both been dubbed “the next Christine Sinclair” but Kadeisha Buchanan and Jordyn Huitema deserve their own spotlight. In 2015, Buchanan ended Sinclair’s 11-year run as Canadian female soccer player of the year. In 2020, she earned the honour for the third time. Huitema was just 15 when she debuted for the senior national team and when she got her first goal a couple months later, she became the second-youngest scorer in team history.

A couple of brakewomen-turned-pilots are making breakthroughs in bobsleigh. Melissa Lotholz won Canada’s first ever World Cup medal in monobob, which will make its Olympic debut at Beijing 2022. Cynthia Appiah drove to the top Canadian result in two-woman and monobob at the 2021 World Championships.

A lot of turnover after PyeongChang 2018 has allowed new stars to shine in short track speed skating. Alyson Charles and Courtney Sarault have become consistent medal contenders – and key relay contributors – since their World Cup debuts in the fall of 2018.

Celebrating moms who do it all

We’re not saving our love for Mother’s Day. Let’s celebrate some Team Canada women who are taking on the challenges of motherhood while choosing to challenge for success in their sports.

Melissa Bishop-Nriagu brought her daughter into the world in July 2018. Since then, the 800m runner who finished fourth at Rio 2016 has returned focus to achieving her athletic dreams, all the while balancing training time with Corinne time.

Boxer Mandy Bujold didn’t have the Olympic debut she hoped for in 2016 when she was struck by illness. But heading towards Tokyo 2020 she has one more source of inspiration when the going gets tough – daughter Kate, who was born in November 2018.

Elisabeth Maier welcomed her son Hendrix in December 2019. One year later, she was back on skeleton’s World Cup circuit with her wee one in tow and talking about the challenges of a post-partum return to elite sport and her dual roles as an athlete and mother.

At the recent Tournament of Hearts, Rachel Homan skipped her team to a runner-up finish while eight months pregnant with her second child. She was the second-ranked player at her position during the women’s curling national championship. In the words of longtime teammate Emma Miskew: “Unbelievable that you curled that well. Think all women should be inspired to do that. It’s just amazing.”

Ann-Renée Desbiens started Canada’s opening game at PyeongChang 2018, earning an 18-save shutout against the Olympic Athletes from Russia en…