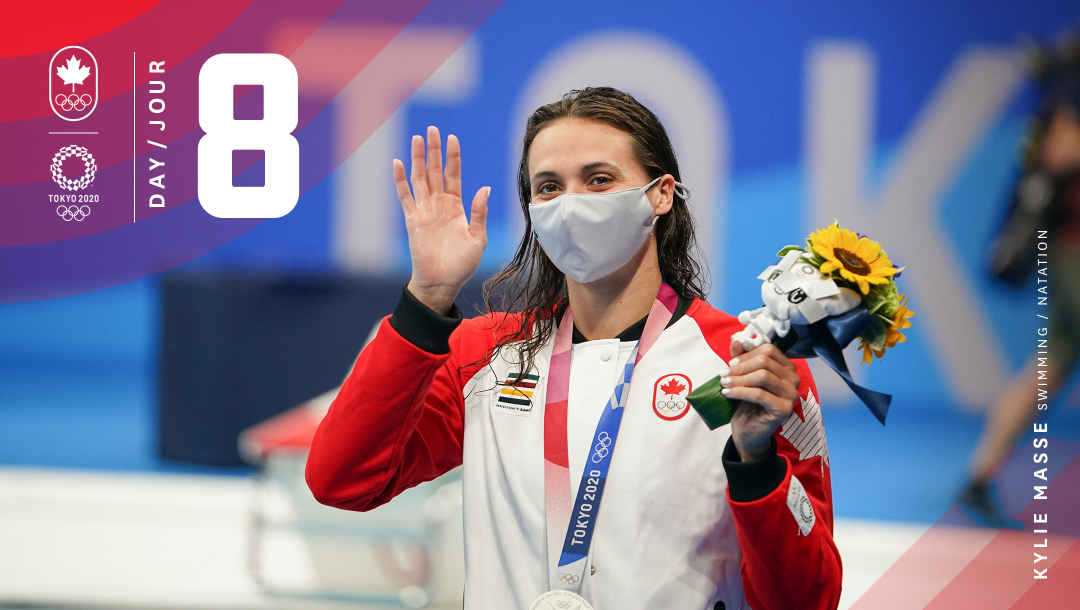 Kylie Masse swam to her second medal of Tokyo 2020, Jennifer Abel finishes top-three in the 3m springboard semifinals, and Andre De Grasse starts his run towards the 100m podium.

There was only one session on the penultimate day of competition in the pool, but it featured Canada winning a fifth medal in the pool as Kylie Masse claimed her second backstroke silver as she finished second in the 200m backstroke. She broke her own national record by almost half a second. Taylor Ruck was also swimming in her first individual Olympic final and finished sixth.

In his Olympic comeback, Brent Hayden swam in the semifinals of the men’s 50m freestyle but did not advance to the final after finishing in a tie for ninth overall.

The second day of track and field saw Andre De Grasse in fine form as he gets his Tokyo 2020 Olympic Games underway in the men’s 100m, advancing onto tomorrow’s semifinal with a time of 9.91. Bismark Boateng (10.47) and Gavin Smellie (10.44) will not advance but will look to return for the men’s 4x100m relay. Khamica Bingham (11.22) and Crystal Emmanuel (11.21), raced in the semifinals of the women’s 100m but will not advance into the final.

Sage Watson got the day started in the women’s 400m hurdles, racing to a fourth place finish in her heat to book her ticket to the semifinal. Noelle Montcalm finished with a season-best time of 55.85 but will not advance. The morning session also included the first round of the men’s 800m with Marco Arop and Brandon McBride. Arop (1:45.26) won his heat to move on to the semifinals while McBride had some difficulties and will not advance.

Crispin Duenas competed in the 1/8 elimination round of the men’s individual recurve event against Florian Unruh of Germany. Duenas was able to take one set, but his opponent ultimately prevailed, winning six set points to two.

Tammara Thibeault fought in a 75kg quarterfinal against Nouchka Fontijn of the Netherlands. A win would have guaranteed her a medal, a first for Canadian women’s Olympic boxing, but she lost 5-0 and will not have a semifinal bout.

Jennifer Abel and Pamela Ware competed in the semifinals of the women’s 3m springboard event, looking to be among the top 12 that advance to the final. Abel scored 341.40 on her five dives to finish third behind two Chinese divers, Shi Tingmao (371.45) and Wang Han (346.85). Ware had an unfortunate miss on her final dive that dropped her down to 18th place.

Boady Santavy ended up finishing one kilogram shy of the podium in the men’s 96kg event, placing fourth with his total weight of 386kg, having lifted 178kg in the snatch and 208 in the clean and jerk.

Canada was represented in the Olympic debut of the mixed team relay by Joanna Brown, Amelie Kretz, Matthew Sharpe and Alexis Lepage, who subbed in for Tyler Mislawchuk after he suffered an achilles injury during the individual event. The format of this event saw each team member complete a 300m swim, a 6.8km (two lap) bike and then a 2km (two lap) run before handing off. The Canadians finished 15th.

Through three rounds of play, Corey Conners and Mackenzie Hughes are both tied for 17th at seven-under par. The two Canadians made a move up the leaderboard, as Conners shot a five-under 66 and Hughes shot six-under 65 in the third round. They sit five strokes back of a podium position.

Canada will finish ninth overall at Tokyo 2020 following a 24-10 victory over Kenya in the 9-10 placing game. Bianca Farella had a game high 10 points while captain Ghislaine Landry added nine and Charity Williams five.

The opening series came to an end for Ali ten Hove and Mariah Millen in the 49er FX as they finish 16th overall. William Jones and Evan DePaul ended their competition in the 49er in 19th place. With two races left in the Finn class before the Medal Race, Tom Ramshaw is in 12th place overall in the fleet. He is six points out of the top 10 which will compete in that Medal Race.