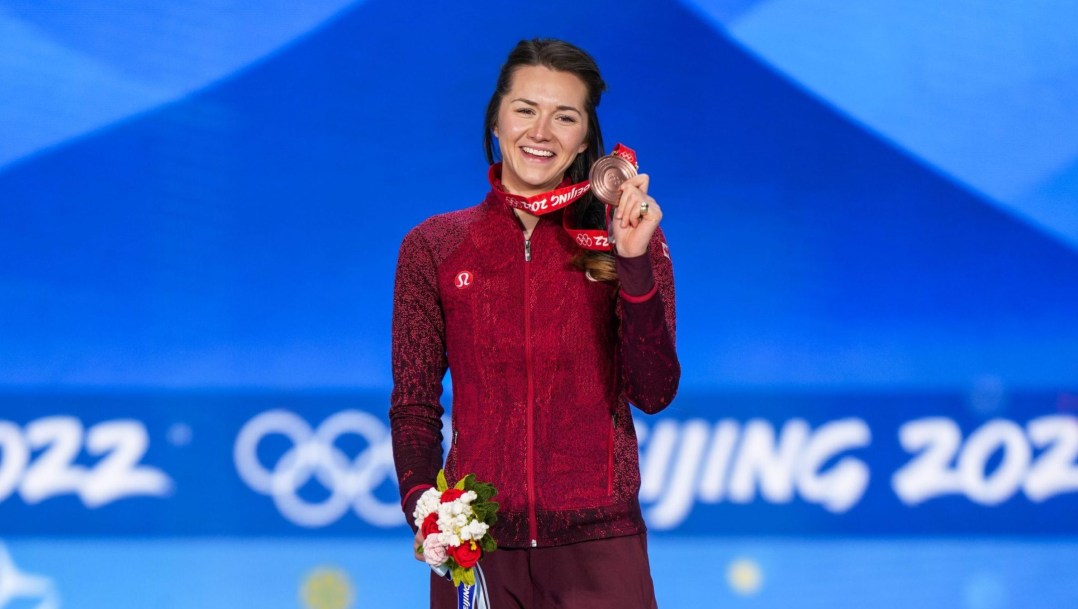 From Canada’s first medal in ski jumping to a women’s hockey game played entirely while wearing N-95 masks, here’s a look back at some of the most memorable moments in Beijing from the perspective of the athletes who lived them.

Long track speed skater Isabelle Weidemann claimed Canada’s first medal of the Games, earning bronze in the women’s 3000m at the National Speed Skating Oval, aka the Ice Ribbon. In a heartwarming moment, Weidemann burst into tears after achieving her podium spot, saying that she was just “overcome with emotion.” Weidemann’s medal moment will also go down in history as Canada’s 200th medal of all time at the Olympic Winter Games.

Alexandria Loutitt, Mackenzie Boyd-Clowes, Matthew Soukoup and Abigail Strate made history by winning Canada’s first ever Olympic ski jumping medal. With adrenaline racing during the mixed team event, all the ski jumpers performed at their very best. After Boyd-Clowes’ jump secured the team the bronze medal position, they embraced in a moment of celebration. “It still hasn’t set in yet” for Olympic rookie Abigail Strate.

With only five days in Beijing under our belts, there are more memorable moments to come. Stay tuned to see what’s in store next for Team Canada.

Steven Dubois skates to silver in his Olympic debut

Steven Dubois emerged from the pack in a crowded 10-man 1500m short track final to reach the podium at his first Olympic Games. The Terrebonne, Quebec native was patient through the first half of the race before making his move with five laps to go, pushing himself into second place. Dubois held onto that position for the rest of the race, edging out Semen Elistratov of ROC at the line in a photo finish for silver. An emotional Dubois “couldn’t believe it” when he crossed the finish line to win his first Olympic medal.

Keegan Messing makes it to Beijing 2022 after positive test

Keegan Messing had to change his plans because of a positive COVID-19 test before travelling to Beijing 2022. Though he missed the team competition, he made it just in time to compete in the men’s short program. Not only did he compete, but according to him it was the “best I’ve landed all three jumps all season long.” Messing finished 11th overall despite not knowing whether he would make it to the Beijing at all.

It’s all about the mental game for bobsledder Christine De Bruin. “I really just wanted to stay focused,” says De Bruin looking back on her competition. De Bruin says that working with a sports psychologist helped her to stay grounded. This mentality and a few amazing runs carried her right through to the podium where she wore a bronze medal for Team Canada. De Bruin will go down in history as the first ever bronze medallist in the new Olympic women’s monobob event.

Max Parrot captures Canada’s first gold medal of the games, and adds a bronze to his collection

Two years ago, Olympic snowboarder Max Parrot was laying in a hospital bed battling cancer. “At that time, I was definitely not thinking at being at the Olympics again one day,” says Parrot. However this Winter Games he arrived in Beijing back and ready for action. Parrot claimed Canada’s first gold medal of the Games in the men’s snowboard slopestyle event and then followed up with a bronze in the men’s big air event.

In Charles Hamelin’s final dance at the Olympic games, he teamed up with Steven Dubois, Pascal Dion and Jordan Pierre-Gilles to capture gold for Team Canada in the men’s 5000m short track speed skating relay event. Hamelin makes history tying with long track speed skater Cindy Klassen for Canada’s most decorated Winter Olympian. Steven Dubois said that the moment was extra-special because he won alongside his teammates. “It feels like I’m winning with my family,” says Dubois.

In his first race at Beijing, long track speed skater Laurent Dubreuil came up just 0.03 short of the Men’s 500m podium. Fourth is nothing to be ashamed of, but after working tirelessly for a medal, Dubreuil said he needed time to shake off the disappointment.

It wasn’t long before his next race came around. In the 1000m, Dubreuil skated with the fire needed to land him a spot on the podium, leaving the Ice Ribbon with his first Olympic silver medal.

In 2006, Brad Gushue was part of Canada’s first ever gold medal-winning team in men’s curling. Now, sixteen years later, Gushue has won his second Olympic medal. Alongside teammates Mark Nichols, Brett Gallant and Geoff Walker, Gushue said the round robin was a struggle. After slowly building momentum through five round robin wins, Team Gushue lost to Sweden in the semifinal. Nonetheless, Gushue ended his second Olympics on a high note, defeating the United States 8-5 in a nail-biting consolation game to win bronze.

Looking to bring home gold in Beijing after falling short at PyeongChang 2018, Team Canada’s women’s hockey team put in the work years before taking to the ice against the United States in the gold medal game. They knew that being a good team mate may be the deciding factor in the final minutes of the game and they worked hard over the past few years to build their team spirit.

Ending their Olympic journey with a gold medal was a dream come true for this team and to say that they dominated the tournament would be an understatement finishing with a 7-0 record.