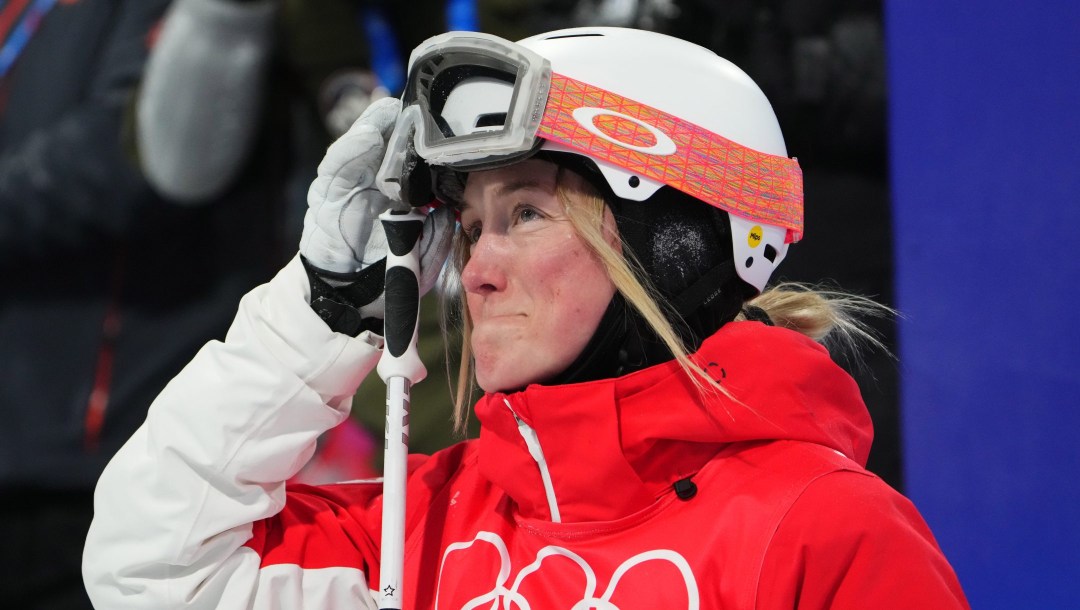 Glory comes from anywhere. But, more often than not, glory is borne out of a show of courage.

That trait, one of our finest as humans, can take many forms on the Olympic stage. So, here’s a look at how some members of Team Canada have shown off their courage, in varying ways, during the Beijing 2022 Olympic Winter Games.

As an Olympic gold medallist (Sochi 2014) and silver medallist (PyeongChang 2018) in women’s moguls, Justine Dufour-Lapointe came to Beijing with plenty of pedigree — and high expectations.

But a hard, painful crash in the final extinguished her chances of another Olympic podium. Still, she stood up, requested a new pole and finished her run, in a show of grit that reverberated throughout Canada.

“I had to finish this Olympic dream on my two feet,” she told the CBC afterwards, fighting back tears. “The only thing that is important is to never give up.

“Life is not always so easy. But I just want to make sure everyone at home knows that I never gave up.”

READ: Justine Dufour-Lapointe didn’t want to give up

It’s safe to say that snowboarder Meryeta O’Dine is on the same page as Dufour-Lapointe when it comes to not giving up.

A concussion prematurely ended her hopes of competing in PyeongChang four years ago. Then, in early 2020, she lost her brother to cancer, and subsequently struggled with anxiety and depression. Whether she’d ever compete in the Olympic Games seemed in doubt.

She managed to make it to Beijing 2022, only to find herself being fallen on by a competitor in the final of the mixed team snowboard cross. But O’Dine got to her feet and was able to cross the finish line third, earning a bronze for herself and Eliot Grondin, to go alongside her own bronze in the women’s individual event.

Imagine the worst case of jet lag you’ve ever had. Now imagine that, while still waylaid by said jet lag, you’re expected to get on the Olympic ice and, oh, you know, perform a figure skating short program at the highest level.

Keegan Messing had to fly around nearly the entire world just to get to Beijing after a weeks-long ordeal following an unexpected positive COVID test. Then, less than 24 hours later, he was in competition. Things could have gone disastrously wrong, but Messing pulled it together to deliver a clean performance and a top-10 finish in the short program.

Sadovsky steps in on short notice

Messing’s delayed arrival in Beijing had a domino effect. With the reigning national champion stuck in Canada and the team event about to start, the spotlight was suddenly placed on Olympic rookie Roman Sadovsky. Thrust into kicking off the figure skating competition for Canada, he perhaps didn’t have the performances he desired but he played his part in getting Canada close to the podium.

Remme fights through the pain

An injury just before a big event has to be among every athlete’s worst fears. But that’s exactly what alpine skier Roni Remme had to deal with in her second Olympic Winter Games.

While warming up for the women’s super-G event, Remme smashed her hand on a gate and later posted on her Instagram that there was a moment when she thought she wouldn’t even start the race. But she did start and finished 24th — her best super-G result in an elite level international race.

Short track speed skater Kim Boutin won three medals and carried Canada’s flag in the Closing Ceremony at PyeongChang 2018. But those achievements were overshadowed by the abuse and threats directed at her after the 500m race, in which another competitor was disqualified for bumping her and Boutin was moved into the bronze medal position.

Four years later, after what Boutin described as a “rocky road” on the emotional front, she once again claimed bronze in the 500m event, Canada’s first short track medal in Beijing.

“I am very proud that I felt comfortable on the ice without any fear,” said Boutin. “A successful final.”

Finishing fourth at an Olympic Games is difficult to grapple with. Finishing fourth and having just a few days to mentally prepare for another race is especially hard. For long track speed skater Laurent Dubreuil, he had only a few days to overcome missing the podium in the men’s 500m by just 0.03. The 29-year-old is now leaving Beijing with a 1000m silver medal.

“This silver medal feels like a win,” said the Lévis, Quebec native. “The fourth place in the 500m felt like a disaster.

“This is a week I will remember for a long time. The last four years I’ve trained a lot on the 1000m to give myself another chance. If you only compete in one distance and mess up, it’s over. Now I had another chance.”

Appiah goes back to top of track after overturning

It’s one of the scariest things you can see happen on an ice track: a bobsleigh tipping on its side and then continuing to slide until it just stops. In the third heat of the two-woman event, Cynthia Appiah and Dawn Richardson Wilson had such a crash in one of the corners.

After their sled slid through the finish, they stood up and shook themselves off. Uninjured, they continued in the competition. After completing their fourth and final run, you couldn’t help but smile as they danced in their sled, knowing there were smiles under their own helmets.