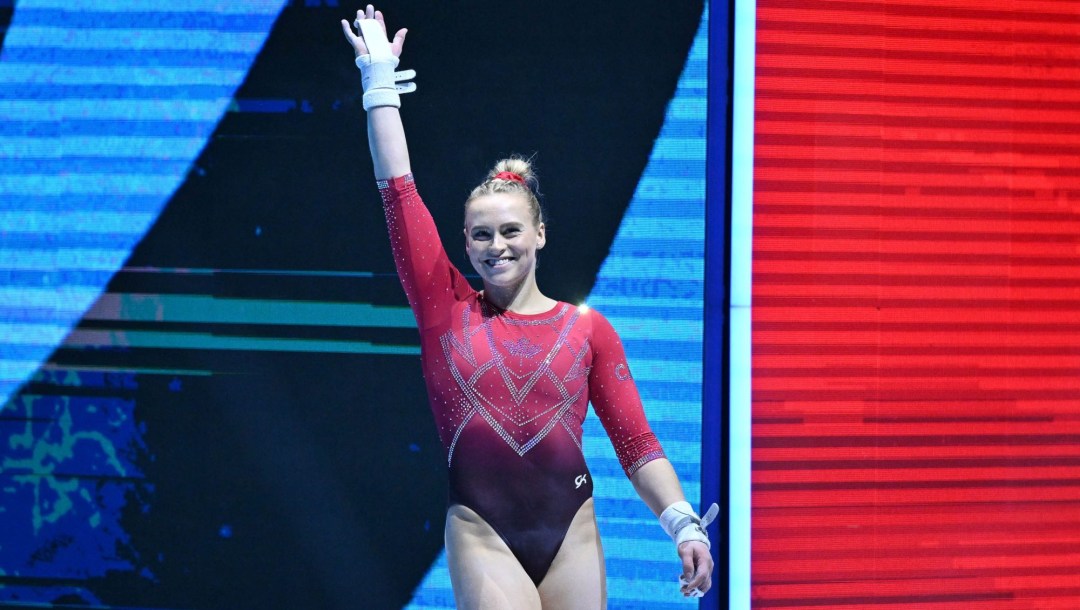 What a weekend it was for Canadian athletes!

Here are the details on all that and a few other things you might have missed:

Artistic Gymnastics: Black is 🔙 on the podium! 🔥

On Tuesday, Canada won its first ever team medal at the FIG Artistic Gymnastics World Championships and secured a women’s team ticket to Paris 2024. In addition to being the veteran leader of that squad, Ellie Black had some standout individual performances in Liverpool, England.

On Sunday, she secured the silver medal in the women’s beam final with her score of 13.566 points. It is her second career individual medal at the worlds, following the all-around silver she earned in 2017.

She had two other individual top-five finishes. In the women’s all-round final on Thursday, the 27-year-old finished in fifth position. On Saturday, she finished fourth in the vault final, missing the podium by just 0.05 of a point.

Deanna Stellato-Dudek made history at the Grand Prix de France on Saturday as she became the oldest athlete to win a Grand Prix of Figure Skating event. The 39-year-old and partner Maxime Deschamps skated to gold in the pairs event with a total score of 185.84 points.

Combined with the silver medal they won at Skate America, Stellato-Dudek and Deschamps have locked up one of the six pairs spots for the Grand Prix Final in Turin in mid-December. Stellato-Dudek’s story is making headlines worldwide. She was the 2000 world junior silver medallist in women’s singles while representing the United States, but retired a year later due to injuries. After close to 16 years away from the sport, she decided to make a comeback as a pairs skater. She and Deschamps teamed up in 2019 and have clearly found their match in each other.

In the ice dance event, Laurence Fournier Beaudry and Nikolaj Soerensen won the silver medal in their first outing of the Grand Prix series. They’ll compete again at NHK Trophy in Japan in two weeks.

Team Gushue are the first ever men’s champions of the Pan Continental Curling Championships. On Sunday, skip Brad Gushue, vice-skip Mark Nichols, second E.J. Harnden and lead Geoff Walker defeated South Korea 11-3 in the final in Calgary. The tournament was introduced this season as a world championship qualifier for countries outside of Europe. Canada will host the men’s worlds in Ottawa in early April.

In the women’s competition, Team Einarson (skip Kerri Einarson, vice-skip Val Sweeting, second Shannon Birchard and lead Briane Harris) bounced back to hold off the Americans in the bronze medal game, winning 7-5. Canada needed to be among the top five teams in the women’s event to qualify the country’s spot for the world championships in Sweden in late March.

Two Canadian judokas made their return to an IJF Grand Slam podium over the weekend, capturing their first medals since April 2021. First, Christa Deguchi won gold in the women’s 57kg event in Baku, Azerbaijan on Friday for her seventh career Grand Slam medal. Then Arthur Margelidon claimed silver in the men’s 73kg weight class on Saturday.

The Canadian women’s 3×3 basketball team of Katherine Plouffe, Michelle Plouffe, Kacie Bosch and Paige Crozon won gold at the FIBA 3×3 AmeriCup in Miami. They claimed a 15-11 victory over Brazil in the final game. Michelle scored or assisted on 11 of Canada’s 15 points in the final. The 30-year-old was named the Most Outstanding Player in the women’s tournament.

After a super successful summer that saw this quartet take silver at the FIBA 3×3 World Cup and win four stops of the FIBA 3×3 Women’s Series, this is their first tournament from which ranking points will count towards Olympic qualification for Paris 2024.

It took 17 matches and more than a month, but someone finally put an end to Félix Auger-Aliassime‘s win streak. At the Paris Masters in France, an ATP 1000 event, Denmark’s Holger Rune avenged his loss to the Canadian in last week’s Basel final with a 6-4, 6-2 victory.

Despite the loss, Auger-Aliassime’s second ever appearance in a Masters 1000 semifinal means he will rise to a career-high of No. 6 in the ATP rankings beginning Monday. He has the No. 5 spot within reach as he prepares to take part in the prestigious ATP Finals for the first time starting November 13 in Turin, Italy. Only the top eight men this season will compete.

Canada concluded the third and final leg of the FINA Swimming World Cup with 16 medals. There were three gold medals by Kylie Masse (50m backstroke), Summer McIntosh (200m butterfly) and Sydney Pickrem (400m individual medley). McIntosh broke the national record in the 800m freestyle (8:07.12) as she won the silver medal. Pickrem picked up silver medals in the 200m IM and 200m breaststroke.