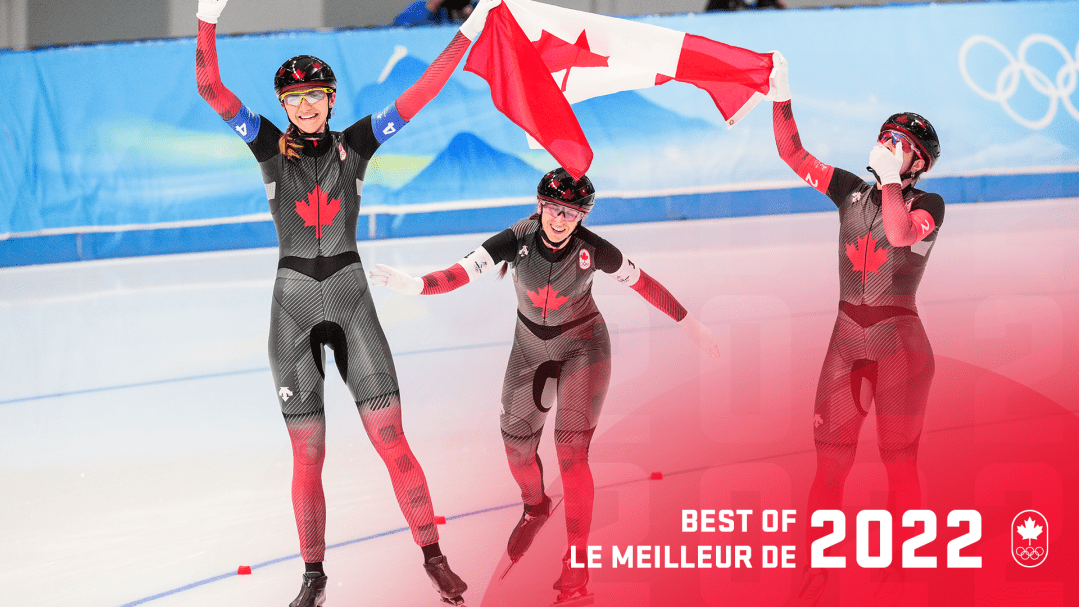 Canada brought home five medals in long track speed skating from Beijing 2022 with four different skaters making the podium. Leading the Canadian crew was Isabelle Weidemann, who won a full collection of Olympic medals – one of each colour.

Isabelle Weidemann won Canada’s first medal at Beijing 2022 when she secured bronze in the women’s 3000m. And she was only just getting started.

The 26-year-old athlete made one more solo trip to the podium with a silver medal in the women’s 5000m. This second medal confirmed without a shadow of a doubt that the Canadian skater was a force to be reckoned with any time she hit the ice.

“Winning a medal earlier in the week, I thought it was the top of it, so this is also very exciting. I was hoping the 3000m wasn’t a fluke,” she explained after winning her second career Olympic medal. The only other Canadian athlete to win Olympic medals in both the 3000m and 5000m was Cindy Klassen at Turin 2006.

Blondin, Maltais and Weidemann cash in their Golden Ticket

After two Olympic medals, what more could you want? Well as they say, there’s never two without three. Weidemann and her teammates Ivanie Blondin and Valérie Maltais were crowned Olympic champions in the team pursuit.

The trio managed to pull together all their efforts throughout the last quadrennial to reach the pinnacle of success in the event. Up to that point, the trio had always been just shy of the highest step on the podium at a major event, including a heartbreaking second-place finish at the ISU World Championships in February 2021.

Unbeatable in the three team pursuit World Cup races during the fall of 2021, the Canadians had Olympic gold in their sights… and a gold medal ticket to cash in.

Weidemann may be the most reserved of the trio, but the night after their silver medal at the 2021 Worlds, she found a way to motivate her teammates and make them smile. Out of yellow cardboard, she made three “tickets for a gold medal,” valid through February 15, 2022, that she slid under Blondin’s and Maltais’ doors. These symbolic tickets represented all the work they put in to reach the top of the podium.

The golden finish in the Olympic event allowed the new triple Olympic medallist to tell La Presse: “It’s a good thing we finished second at the last world championships; in the end, it pushed us even more tonight!”

This gold medal made Maltais one of three athletes in the world to win Olympic medals in both speed skating disciplines. She won silver in the 3000m short track relay at Sochi 2014.

After her success in Beijing, Weidemann was named Team Canada’s flag bearer for the Closing Ceremony. “It’s such an honour. It’s just been such a crazy end to such an unbelievable week here at the Olympics. I’m just so, so honoured,” said the most decorated Canadian female athlete of these Games.

An Olympic medal four years in the making for Blondin

Just a few days after Canada’s team pursuit win, Blondin was back on the Olympic podium, this time with a silver medal in the women’s mass start.

This medal represents a bit of a redemption arc for Blondin who had her confidence shaken when she could not reach the podium four years earlier at PyeongChang 2018. As the mass start made its Olympic debut, the Canadian, then a two-time world championship medallist in the event, saw her medal hopes dashed when she fell in the semifinal.

At her third Games, the 31-year-old athlete found her way to the podium twice instead of once. “I hope I can inspire people in the future. When things aren’t going great, it’s in your control to turn it around and try to make it great,” said Blondin, with a silver medal around her neck.

While Blondin had to wait four years for another chance at an Olympic podium in an individual event, the wait was much shorter for Laurent Dubreuil.

The 500m world champion finished fourth in the event in Beijing, just 0.03 of a second from a bronze medal. “Fourth place in the 500m felt like a disaster,” admitted Dubreuil, who medalled in all eight pre-Olympic 500m races on the World Cup circuit.

While Dubreuil was disappointed to have missed the podium in his best event, he still had one more card to play. Five days later, he took part in another event. “The last four years, I’ve trained a lot on the 1000m to give myself another chance.”

The sprint specialist took full advantage of his second race on Olympic ice, finishing in second place. “This silver medal feels like a win,” he explained as he stepped off the podium. “I had a tough week trying to get over that [fourth in the 500m]. It took a lot of belief and a lot of support to turn things around and I’m really proud.”

Dubreuil is happy with his performance on the ice, but one thing’s for sure, in his eyes, his success is not what defines him. “I’m not scared going into a race because I know that even if I fail, I’m still going to go home and they [his wife and daughter] will love and support me.”

The father of Rose, 3 and Nathan, born this September, has a happy and fulfilling life, and now, an Olympic medal in his trophy case.