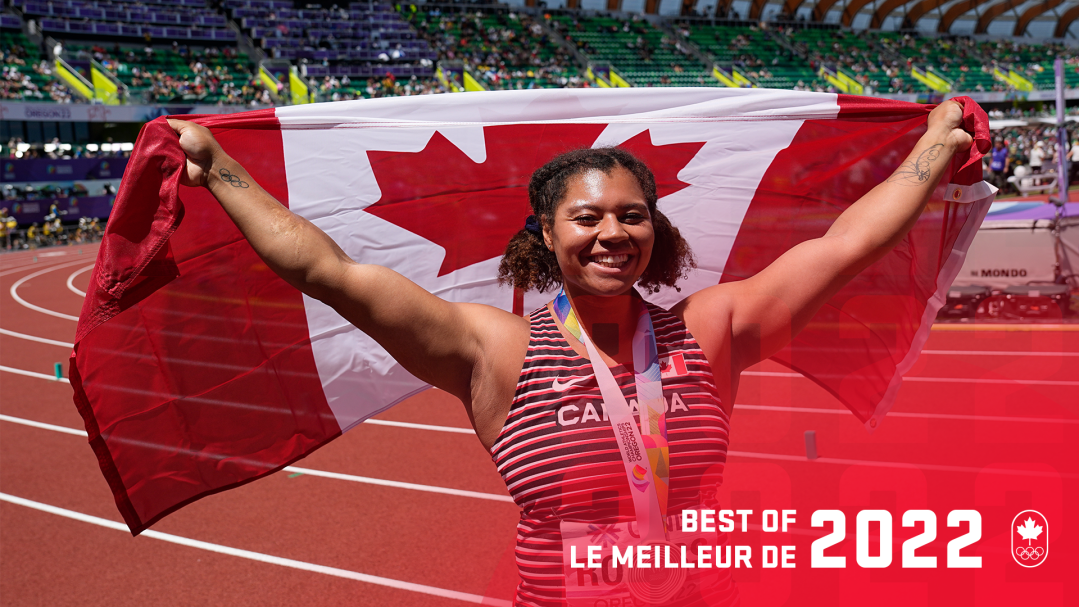 It was a year full of podium finishes for members of Canada’s athletics team.

From the track to the field to the road, there were so many strong performances all across the globe. While many medal winners have reached the podium before, there were also some up-and-comers who delivered breakout performances this year. Let’s take a look back.

A couple months after having their Tokyo 2020 bronze medals officially upgraded to silver, the Canadian men’s 4x100m relay team delivered a gold medal performance at the 2022 World Athletics Championships in Eugene, Oregon.

The team of Aaron Brown, Jerome Blake, Brendon Rodney, and Andre De Grasse won gold in a Canadian record time of 37.48 seconds, edging out the United States and Great Britain for top spot on the podium. The Canadians were in third place at the halfway mark of the race but a strong final leg from De Grasse secured the victory.

It was the first world medal for Canada in the event since Brown, Rodney and De Grasse teamed up with Justyn Warner to win bronze in 2015. Canada hadn’t won gold since 1997 when Robert Esmie, Glenroy Gilbert, Bruny Surin and Donovan Bailey raced to the world title. Gilbert is the link between the two teams, now serving as the head coach for Athletics Canada.

The members of the men’s relay team weren’t the only Canadians to have impressive showings at the 2022 World Athletics Championships.

Camryn Rogers became the first Canadian woman to win a medal in the hammer throw, taking home silver. Not only that, it was the country’s first world championship medal in any women’s field event.

Rogers followed that up with a gold medal performance at the 2022 Commonwealth Games. The 23-year-old qualified for the final with a Games record throw of 74.68m. In the final, Rogers’ third throw of 74.08m secured her the top spot on the podium.

Rogers nearly reached the Olympic podium at Tokyo 2020, finishing fifth. But she showed she was one to watch this year with her Canadian record toss of 77.67m in June that ranked her fourth in the world for the season. Rogers wasn’t alone as a Canadian standout in hammer throw in 2022. Jillian Weir joined her on the podium at the Commonwealth Games, winning the bronze medal, after placing fifth in the world championship final.

Pierce LePage, meanwhile, won decathlon silver at the world championships by smashing his personal best score. The 26-year-old finished with 8701 points, nearly 100 points higher than his previous best, thanks in part to PBs in the 400m, 110m hurdles, and discus. LePage actually held the lead heading into the last two events before being passed by world record holder Kevin Mayer for the gold medal.

This was the first career world championship medal for LePage, who had finished fifth in the decathlon at Tokyo 2020 and the 2019 World Championships. He proved Canada has an amazing 1-2 punch in him and Olympic champion Damian Warner, who unfortunately had to withdraw from the worlds due to injury.

Marco Arop was Canada’s other medal winner at the world championships, claiming bronze in the men’s 800m after finishing with a time of 1:44.28. It’s been a quick rise to the podium for Arop after beginning his career just six years ago.

The 24-year-old also had a strong showing in Diamond League action this year, finishing on the podium four times to end the season as the overall winner for the men’s 800m.

It was also a breakout year for Sarah Mitton. The shot putter improved on her personal best by almost a metre-and-a-half in 2022, setting the Canadian record at 20.33m in June. That ranked her fourth in the world for the season. She nearly reached the world championship podium in Eugene, earning Canada’s all-time best result in the women’s shot put with a fourth-place finish. Mitton’s best throw of 19.77m tied her with Jessica Schilder of the Netherlands for third, but the Dutch athlete took the bronze in a tiebreaker.

A couple weeks after the world championships, Mitton, who had finished 28th at Tokyo 2020, won gold in the women’s shot put at the 2022 Commonwealth Games. Later in August, the 26-year-old dominated at the 2022 NACAC Championships in the Bahamas, winning gold at the competition for athletes from North America, Central America and the Caribbean.

In a remarkable turn of events, the Canadian records in the men’s and women’s marathons were both broken in 2022.

Cameron Levins only took four years to improve upon his record in the men’s race, running 2:07:10 while finishing fourth at the World Athletics Championships. That was Canada’s best ever men’s marathon result at the worlds. Levins had first put his name on the national record in 2018 when he erased a mark that had stood for 43 years.

In September, Natasha Wodak demolished the national record in the women’s marathon. Her time of 2:23:12 at the world famous Berlin Marathon was a personal best by more than three minutes and took more than a minute and a half off the previous mark set by Malindi Elmore in 2020.

A few other big performances

Dunfee, the bronze medal winner of the 50km race walk at Tokyo 2020, finished the race in 38:36.37 to establish a Canadian and Commonwealth Games record. It followed his sixth-place finish in the brand new 35km race walk at the worlds, which replaced his beloved 50km event.

That same day in Birmingham, the quartet of Natassha McDonald, Aiyanna Stiverne, Micha Powell and Kyra Constantine finished first in the women’s 4x400m relay with a time of 3:25.84, beating out the Jamaicans by over a second (3:26.93). McDonald, Stiverne and Constantine had teamed with Zoe Sherar to finish fourth at the world championships.

Elsewhere at the worlds, Mohammed Ahmed finished fifth in the 5000m and sixth in the 10,000m in a show of his consistency in the long distance track event while Django Lovett was sixth in the men’s high jump final. He’d landed himself on three Diamond League podiums throughout the year, including at the circuit’s final meet in Zurich.