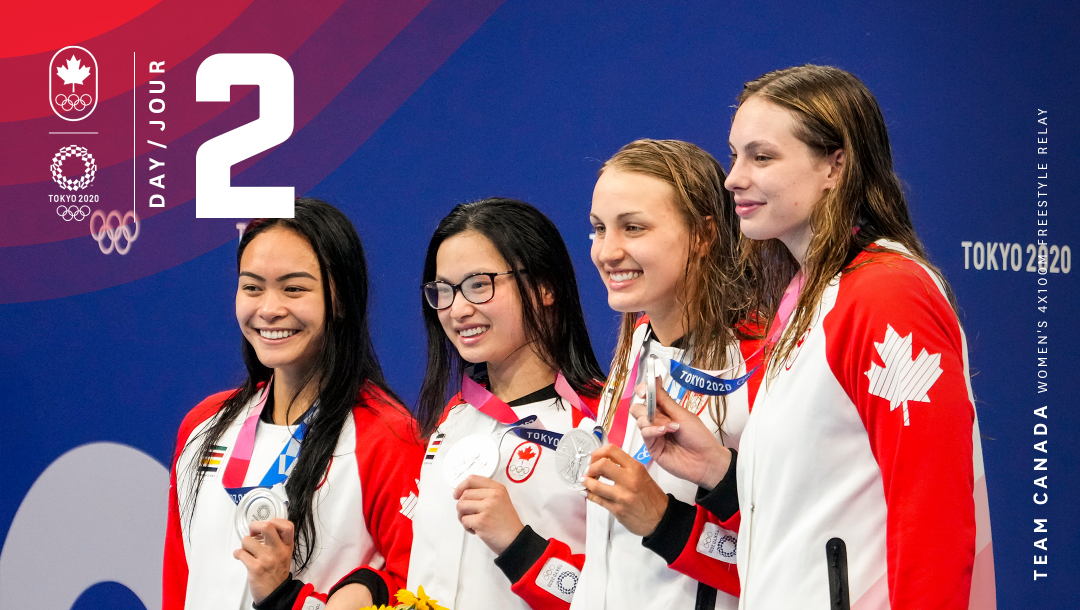 Those are just a few of the storylines involving Canadian athletes and teams.

You can check out the official schedule of Canadians competing today at the bottom of this page and read on for the details of what happened in each sport.

The women’s 4x100m freestyle relay team delivered Canada’s first medal of Tokyo 2020. Kayla Sanchez, Margaret Mac Neil, Rebecca Smith, and Penny Oleksiak swam to silver in a time of 3:32.78. Taylor Ruck will also receive a medal her role in swimming the heats to get Canada to the final. The medal is the fifth of Oleksiak’s career, tying her as Canada’s most decorated summer Olympian.

Earlier in the morning session, Mac Neil had finished sixth overall in the 100m butterfly semifinals to advance to the Day 3 final. Katerine Savard had also swam in the semis but did not move on with the top eight.

Then during the nighttime session, two-time reigning world champion Kylie Masse broke the Olympic record in the 100m backstroke heats, only to see it broken twice more by American Regan Smith and Australian Kaylee McKeown. She is onto the semifinals along with Ruck. The youngest member of Team Canada, 14-year-old Summer McIntosh, made a splash in her Olympic debut, breaking the Canadian record in the heats of the 400m freestyle with her time of 4:02.72. She was the fifth-fastest qualifier for the final. The men’s 4x100m freestyle relay ended the night by advancing to the final in seventh place from the heats.

Neither Kelsey Wog nor Kierra Smith advanced from the women’s 100m breaststroke heats. Cole Pratt and Markus Thormeyer also did not advance from the men’s 100m backstroke heats.

The first Canadian divers to reach the podium in Tokyo are Jennifer Abel and Mélissa Citrini-Beaulieu, who claimed silver in the women’s 3m synchro springboard event. It was a triumphant moment for Abel, who finished a heartbreaking fourth in both of her events at Rio 2016. This is Canada’s best Olympic result in any diving event since Beijing 2008.

Skylar Park, the 2019 World bronze medallist, was hoping to become Canada’s third ever Olympic medallist in taekwondo. After opening the 57kg event with a 25-15 against Stacey Hymer of Australia, she had a tough 18-7 loss to Lo Chia-Ling of Chinese Taipei in the quarterfinals. Had Lo reached the final, Park would have had a second opportunity to advance via the repechage but it was not to be.

Matt Berger and Micky Papa were among the first skateboarders to take part in their sport’s Olympic debut with the men’s street competition taking centre stage.

Papa missed the cut for the finals, finishing 10th in the combined rankings of the heats. Only the top eight men advanced from the qualifiers. The 30-year-old from Vancouver had a total score of 30.39. His teammate, Berger, of Kamloops, B.C. finished in 20th, with a score of 4.02.

Ecaterina Guica was competing in the women’s 52kg event, but was eliminated by Belgium’s Charline Van Snick in the Round of 32.

A day after Michael Woods’ fifth place finish in a thrilling sprint ending to the men’s road race, Leah Kirchmann, Karol-Ann Canuel and Alison Jackson also rode from the Musashinonomori Park to the Fuji International Speedway, a route covering 137km. Canuel was the top Canadian in 16th place, with Jackson and Kirchmann finishing with identical times in 32nd and 36th place, respectively.

Ninth seed Félix Auger-Aliassime was expected to take on two-time defending Olympic champion Andy Murray on centre court. But Murray withdrew, so instead Auger-Aliassime faced off with Max Purcell of Australia. But it didn’t end up going the Canadian’s way as he lost in straight sets, 6-4, 7-6 (2).

The Canadian team of Ellie Black, Brooklyn Moors, Shallon Olsen, and Ava Stewart competed in the qualification round and finished 10th, making them the second reserve squad for the eight-team final. Moors and Black both advanced to the 24-woman individual all-around final. Olsen was the fifth-highest qualifier for the eight-woman vault final. Black is ranked the same heading into the beam final.

Gabrielle Smith and Jessica Sevick advanced to the final of the women’s double sculls event. The duo are the first Canadians to make it into a final for rowing after finishing second in their semi. Carling Zeeman advanced to the semifinals of the women’s single sculls, coming in second in her quarterfinal race. She had been third through the 1500m mark before overtaking the British boat. Trevor Jones also finished second in his quarterfinal of the men’s single sculls to move on to the semifinals.

Patrick Keane and Maxwell Lattimer secured their spot in the semifinals of the men’s lightweight double sculls, finishing second place in their repechage. Canada’s men’s and women’s fours were unable to advance to the A finals from their repechages and will instead race in the B finals.

Four Canadians were on the piste on Day 2. Kelleigh Ryan advanced the furthest, making it to the quarterfinals of the women’s individual foil before being eliminated by Adelina Zagidullina of the ROC. Eleanor Harvey and Jessica Guo had reached the Round of 16 before coming up against some tough competition in eventual gold medallist Lee Kiefer of the United States and two-time world champion Arianna Errigo of Italy, respectively. Marc-Antoine Blais Bélanger was solo in the men’s individual épée and was eliminated in the Round of 64.

Lynda Kiejko competed in qualification round of the women’s 10m air pistol at the Asaka Shooting Range, the same venue her father competed at 57 years ago. She finished in 47th with 558 points. Only the top 8 athletes qualified for the finals.

Mandy Bujold lost in an unanimous decision to 29-year-old Serbian Nina Radovanovic in the preliminaries of the women’s 51kg division on Sunday. The 11-time national champion and now the only Canadian woman to fight in two Olympics, said before Tokyo that these would be her final Games, marking the end to an illustrious career.

Cameron Smedley and Florence Maheu were Canada’s first slalom paddlers in action with the heats for the men’s C-1 and the women’s K-1 taking place. Maheu has advanced to the women’s kayak semifinal in 24th place while Smedley did not rank high enough in the men’s canoe event to move on.

As Group Play continues, top-10 ranked Michelle Li got her Olympic Games going in women’s singles with a 2-0 (21-8, 21-9) win against Nikte Alejandra Sotomayor of Guatemala. Jason Ho-Shue and Nyl Yakura lost 2-0 to South Korea in men’s doubles. Rachel Honderich and Kristen Tsai pushed the third seeds from Japan to a third set, but dropped their second match 2-1 (14-21, 21-19, 21-18).

The sailing regatta began for Sarah Douglas in the Laser Radial. After the first two races, she sits in sixth place overall in the fleet. She finished fourth in the second race of the day after finishing 18th in the first race. Five-time Olympian Nikola Girke had three races in the women’s RS:X and sits in 24th place overall.