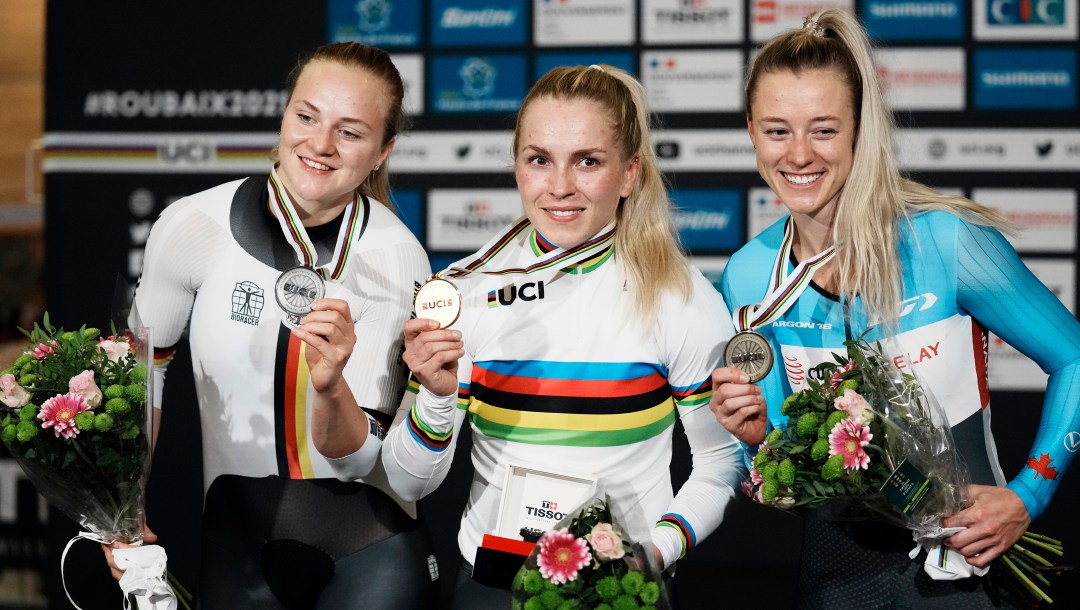 But those are definitely not the only success stories from both summer and winter sports this past weekend. Read on for all the details:

The list of achievements keeps growing for three-time Olympic medallist Maggie Mac Neil, who was named Best Female Athlete of Tokyo 2020 at the VII ANOC Awards presented during the ANOC General Assembly in Crete, Greece on Sunday.

The 21-year-old made her Olympic debut in Tokyo where she won three medals, highlighted by her gold in the women’s 100m butterfly. It was Canada’s first gold of the Games while she also set a Canadian and Americas region record with a time of 55.59 seconds. Mac Neil also helped Canada earn its first medal of the Games when she swam the second leg for the women’s 4x100m freestyle relay team that won silver. On the last day of competition in the pool, she swam the butterfly leg in the women’s 4x100m medley relay as the Canadian quartet won bronze, setting a national record in the process.

Olympic champion Kelsey Mitchell won her first career world championship medal on Friday as she pedaled to bronze in the women’s sprint event at the UCI Track Cycling World Championships in Roubaix, France.

Mitchell beat teammate Lauriane Genest twice in their head-to-head race for third while Germany’s Emma Hinze won the event after racing her teammate Lea Friedrich. This summer at Tokyo 2020, Mitchell became just the second Canadian track cyclist to win gold at the Olympics.

On Sunday, Canada’s success continued in Beijing as Pascal Dion skated to a bronze medal in a photo finish in the men’s 1000m. He edged out Kazuki Yoshinaga of Japan by one one-thousandth of a second. It is Dion’s first individual World Cup medal since 2016.

The competition at the Capital Indoor Stadium was the official test event for Beijing 2022. The short track season continues next week with another World Cup stop in Nagoya, Japan from October 28 to 31.

In her first year competing in the Elite division, Molly Simpson won her first UCI BMX Supercross World Cup medal in her first appearance in a World Cup final on Saturday in Sakarya, Turkey. She defeated the likes of two-time Olympic champion Mariana Pajon of Colombia and the Smulders sisters of the Netherlands, who are both Olympic medallists.

Jasmine Baird came away with her first big air medal at the FIS Snowboard World Cup in Chur, Switzerland. The bronze was her first in a World Cup event since she claimed bronze in the Seiser Alm slopestyle in 2019. Baird immediately put herself into contention after her first trick scored an 80 from the judges – the fourth highest score of the entire competition.

Finishing with a score of 148.75, Baird ended up more than 50 points better than the next closest competitor — fellow Canadian Brooke Voigt, who finished fourth with a final score of 96.25. On the men’s side, Mark McMorris finished fifth in the big air final with a score of 101.25.

Gaskell won Canada’s first medal as she captured a big air bronze in the women’s competition. She put up an impressive score of 91.00 points on her first run to reach the third step of the podium.

Harle earned Canada’s second medal of the day as he won silver in the men’s event with a near perfect score of 98.00. The Canadian narrowly missed a gold medal after Austria’s Matej Svancer put up a score of 99.00 points on his second run.

Valérie Grenier impressed at the first alpine skiing World Cup of the season in Sölden, Austria on Saturday as she raced to a seventh-place finish in the giant slalom.

Grenier was fifth after the first run and though she dropped two places after the second run, she still earned her best ever giant slalom result. It was also her best result in any World Cup event since missing all of the 2019-20 season due to injury.

Emard posts new Canadian best in men’s all around 🤸

William Emard finished eighth in the men’s all around event at the Artistic Gymnastics World Championships in Kitakyushu, Japan on Friday.

The result was a historic one for Team Canada as Emard earned the best-ever finish for a Canadian in the men’s all around at a world championship. He also qualified for the eight-man apparatus finals in vault and rings. The 21-year-old has had a successful season, previously winning three medals at the FIG World Challenge Cup in September.

Skating to another bronze medal ⛸️

Laurence Fournier Beaudry and Nikolaj Sørensen skated to their second medal of the season on Sunday with a bronze at Skate America in Las Vegas, Nevada.

The Canadian duo finished third at the first Grand Prix of the season with a final score of 190.13. Three-time defending champions Madison Hubbell and Zachary Donohue of the United States took gold with 209.54 points while fellow Americans Madison Chock and Evan Bates won silver with a score of 208.23.

In their last appearance at Skate America in 2019, Fournier Beaudry and Sørensen also won the bronze medal. In September, the won silver at the Lombardia Trophy in Italy, an ISU Challenger Series event.

Celebration Tour kicks off in Ottawa ⚽

Three months after winning gold at Tokyo 2020, the Canadian women’s soccer team reunited in the nation’s capital to celebrate their Olympic success with their fans. This also marked their first home game on Canadian soil since May 18, 2019. On Saturday, they kicked off against New Zealand and came out on top with a 5-1 win.

The first goal of the game came when Jessie Fleming converted a penalty kick. Other goals for Canada were scored by Christine Sinclair, Nichelle Prince, Janine Beckie and Adriana Leon.

The two teams will meet for a rematch on Tuesday in Montreal.

The Canadian women’s hockey team defeated Team USA by a score of 3-1 in the first matchup of the Rivalry Series in Allentown, Pennsylvania on Friday.

Sarah Fillier tallied Canada’s first goal and Emily Clark scored twice in the third period to put the Canadians ahead. Emerance Maschmeyer made 28 saves on 29 shots in the win.

The game marked the first meeting between the two teams since Canada’s 3-2 overtime win in the gold medal match of the IIHF Women’s World Championship in Calgary, Alberta on August 31.

Canada and the United States will meet eight more times as a part of the pre-Olympic exhibition series leading up to Beijing 2022. The puck drops again in Hartford, Connecticut on Monday.

Aside from his incredible achievements, Parrot has exemplified the true meaning of perseverance and determination. In December 2018, he was diagnosed with Hodgkin’s lymphoma, bringing an end to his season. After six months of chemotherapy, he immediately returned to training. Just two months later, Parrot reached the top of the big air podium at the X Games in Norway. He won a World Cup gold later that year and started off 2020 with another big air gold at the X Games in Aspen. This past May, Parrot was honoured with the Laureus World Sports Award for Comeback of the Year.

In the first international bobsleigh race at the Yanqing National Sliding Centre, which will host the Olympic sliding events in February, Cynthia Appiah won the bronze medal in the women’s monobob, an event that will make its Olympic debut at Beijing 2022.

Appiah finished her two runs in a total time of 2:10.46, putting her 0.35 behind gold medallist Mariama Jamanka of Germany and just 0.08 ahead of fellow Canadian Christine De Bruin who placed fourth, climbing up three spots in the second run.

In the two-man, Olympic champion Justin Kripps just missed the podium with brakeman Cam Stones as they finished fourth, just 0.06 out of the bronze medal position.

Elisabeth Maier was Canada’s top skeleton racer, finishing 13th in the women’s event. Still ahead on Tuesday are the two-woman and four-man races.