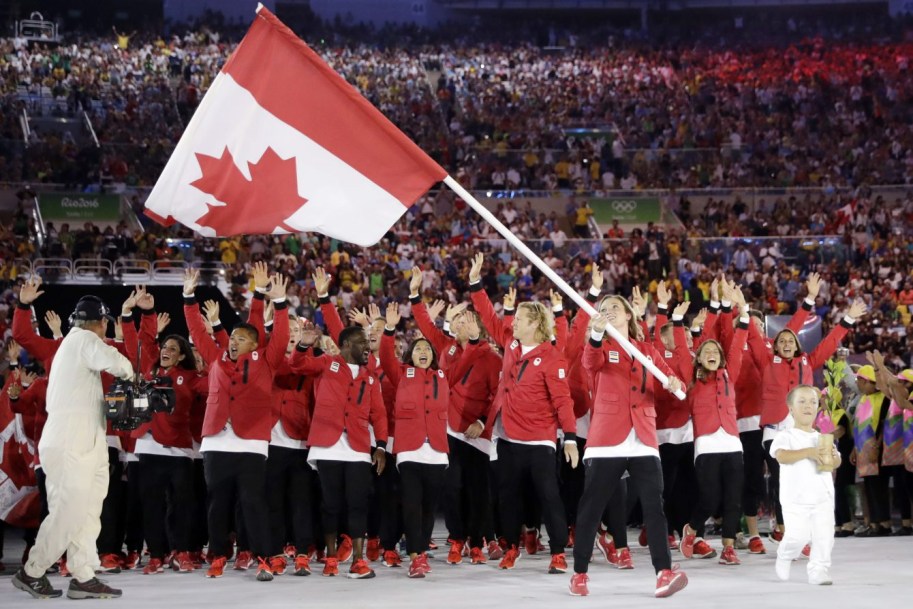 Who has carried the Canadian flag in the Summer Olympic Opening Ceremony? Here is the complete list:

A four-time Olympian, Simon Whitfield won the gold medal in triathlon’s Olympic debut at Sydney 2000 with his memorable sprint to the finish. He added a silver at Beijing 2008 but unfortunately suffered a crash early during the bike portion of his event at London 2012.

At Sydney 2000, Nicolas Gill had become Canada’s first two-time Olympic medallist in judo as he added a silver to the bronze he had won at Barcelona 1992.

Caroline Brunet went to her fourth Olympic Games in Sydney as the reigning three-time world champion in the K-1 500m after winning silver at Atlanta 1996. She won another silver in Sydney, missing the gold by just eight-tenths of a second. She would add a bronze in the K-1 500m at Athens 2004.

It was at Atlanta 1996 that Charmaine Crooks became Canada’s first female five-time Olympian in athletics. She had won silver in the 4x400m relay at Los Angeles 1984 and has gone on to play multiple roles within the Olympic Movement, including as an IOC Member after being elected to the Athletes’ Commission in Atlanta.

Michael Smith went to Barcelona as the reigning world silver medallist in the decathlon. But he unfortunately pulled a hamstring during the first day of the gruelling 10-event competition and had to withdraw.

Carolyn Waldo had won solo silver in the Olympic debut of her sport at Los Angeles 1984. She came home from Seoul with two gold medals, winning the solo and the duet with partner Michelle Cameron.

One of Canada’s all-time swimming greats, Alex Baumann was a double gold medallist in his only Olympic appearance at Los Angeles 1984 where he won the 200m and 400m individual medleys, setting world records in both victories.

Though Canada did not compete at the 1980 Olympic Games after joining the American-led boycott, a team was named and Sue Holloway was selected as the honourary flag bearer. In 1976, she had competed in both the summer and winter Olympic Games, in sprint kayaking and cross-country skiing. She returned to the Olympics at Los Angeles 1984 where she won two medals in the K-2 500m and K-4 500m.

The first woman to be selected as Canada’s flag bearer, Abby Hoffman got to carry the maple leaf in front of the home fans at Montreal 1976 as Canada hosted the Olympic Games for the first time. That was the fourth Olympic appearance for the 800m runner.

Doug Rogers became Canada’s first Olympic medallist in judo when the sport debuted at Tokyo 1964. After judo was not included at the 1968 Olympic Games, Rogers returned to compete in Munich where he finished fifth in both the heavyweight and open events.

Roger Jackson was one half of the celebrated “Golden Rejects” at Tokyo 1964, where he and partner George Hungerford became Olympic champions in the pair in their first regatta ever together in the event. Jackson competed in the single sculls in Mexico City, finishing 11th.

An eight-time medallist at the Commonwealth Games, Rome 1960 was Carl Schwende’s only Olympic appearance.

In the second of his three Olympic appearances, Robert Steckle finished fourth in the 87kg Greco-Roman wrestling event.

In his second Olympic appearance, William Parnell competed in the 800m and 1500m in Helsinki.

In the first Olympic Games after World War II, Robert McFarlane raced in the 400m and the 4x400m relay in London.

James Worrall raced both the 110m and 400m hurdles events in Berlin. Though he did not win a medal, he went on to have a lifelong association to the Olympic Games, serving as a Chef de Mission, COC President, and IOC Member among other roles. Since 2002, Petro-Canada has presented the James Worrall Flag Bearer Award to the athletes chosen to lead Team Canada into the Olympic Games.

In his only Olympic Games, George Maughan finished fourth in the heavyweight boxing event in Los Angeles.

The first non-track and field athlete to be Canada’s flag bearer, Joseph Wright Jr was a second generation Olympian, following his father Joseph Wright Sr who won two medals with the eight at St. Louis 1904 and London 1908. Wright Jr went home from Amsterdam with a silver medal in the double sculls. He would make his second Olympic appearance at Los Angeles 1932.

In his second Olympic appearance, Hector Phillips ran the 800m, in which he was the national record holder, in Paris.

Scottish-born Archie McDiarmid came close to the podium after serving as flag bearer, finishing fourth in the 56-pound weight throw. He also competed in the hammer throw.

Selected as flag bearer after being the only Canadian featured in the New York Times as an athlete to watch in Stockholm, Duncan Gillis won silver in the hammer throw and also competed in the discus.

At the first Olympic Opening Ceremony to include a Parade of Nations, pole vaulter Ed Archibald carried the flag for Canada. He went on to win the bronze medal