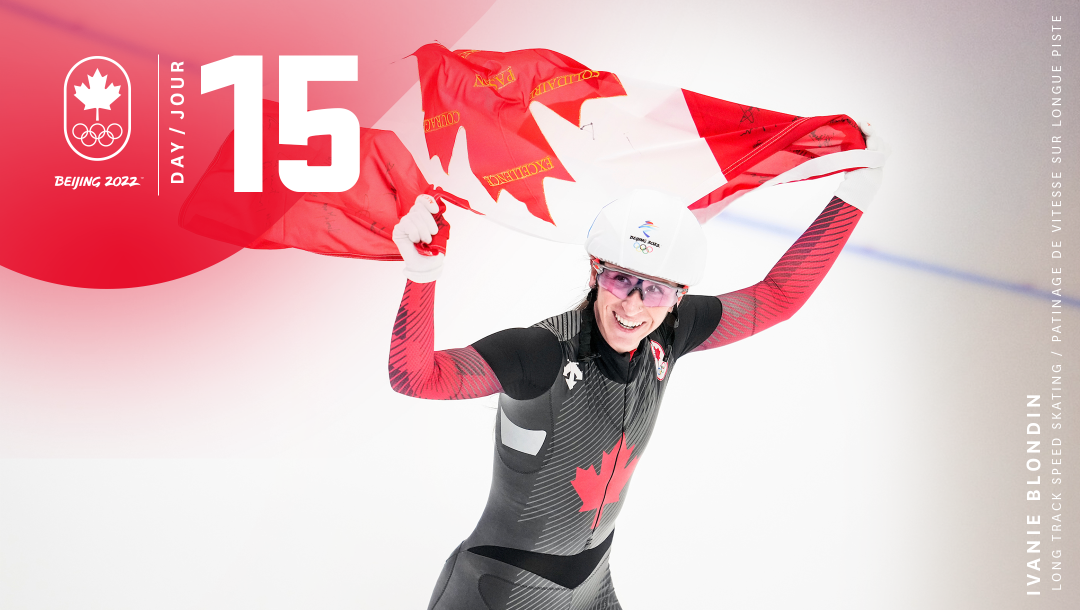 A five-time world medallist in the mass start steps on the Olympic podium one more time in Beijing, a Canadian crew sits in a podium position at the midway mark of the four-man bobsleigh event, and a near-podium finish for a three-time Olympian in ski halfpipe.

The last events at the Ice Ribbon were the women’s and men’s mass start events. After 16 laps around the oval, Ivanie Blondin was just edged out at the finish line by Irene Schouten of the Netherlands, but claimed the silver for her first individual Olympic medal. Valérie Maltais played a key role in dictating the pace of the race and finished sixth in the final.

Jordan Belchos and Antoine Gélinas-Beaulieu finished 13th and 15th, respectively in the final of the men’s event.

Three Canadians competed in the final of the men’s ski halfpipe. After finishing fifth in his first two Olympic appearances at Sochi 2014 and PyeongChang 2018, Noah Bowman was hoping to get on the podium. But he came up just two points shy of the bronze medal, placing fourth with the 84.75 points he earned for his second run. Brendan Mackay and Simon d’Artois placed ninth and 10th, respectively, in the 12-man final.

The two-woman event concluded with heats three and four. Christine de Bruin and Kristen Bujnowksi were the top Canadian sled, finishing in fifth place. Cynthia Appiah and Dawn Richardson Wilson had a rough ride in their third run when their sled overturned in a corner close to the bottom of the track. But they were able to compete in the final run and maintained their eighth place position. Melissa Lotholz and Sara Villani moved up to 12th place for their final result.

After the first two heats of the four-man event, Justin Kripps and his crew of Ryan Sommer, Cam Stones and Ben Coakwell are in third place. There are two German sleds ahead of them and one just behind. They are 0.35 of a second out of second place. Christopher Spring and his crew of Cody Sorensen, Sam Giguere and Mike Evelyn are in 11th. Taylor Austin is driving with Daniel Sunderland, Chris Patrician, and Jay Dearborn and sits 21st.

The last of the alpine events is the mixed team parallel. Unfortunately, because of extremely high winds, the event had to be postponed to Day 16.

Rémi Drolet and Olivier Léveillé were the Canadian entries in the men’s 50km mass start, the last of the men’s cross-country events. Because of high winds and extremely cold temperatures, the race was shortened to 30km. Léveillé broke into the top 30 for the second time in Beijing, finishing 27th, while Drolet placed 35th.