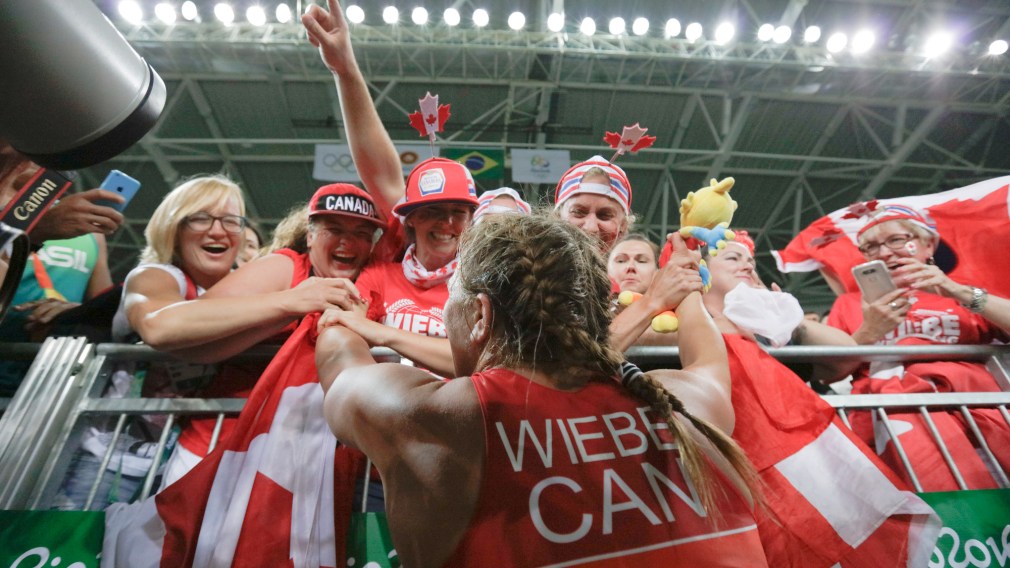 How well do you know some of Team Canada’s Tokyo 2020 hopefuls?

As we gear up for upcoming Olympic Games, let’s take the time to know who Team Canada athletes are outside of the field of play. Are they aspiring artists? A new parent? Dabbling in another sport during their free time?

Every Friday, we’ll be adding a new athlete to this list that you can follow on social media. If you do, in no time you’ll be an expert on Canadian athletes and ready to cheer them on as they compete on the international stage.

Getting introduced to gymnastics at 8-years-old, Rosie MacLennan won Canada’s only gold medal at London 2012. She performed the most difficult routine of the competition to earn a career-high score of 57.305 points for Canada’s first-ever Olympic trampoline gold medal. MacLennan made history at Rio 2016 when she became the first trampolinist to ever win back-to-back Olympic gold medals. 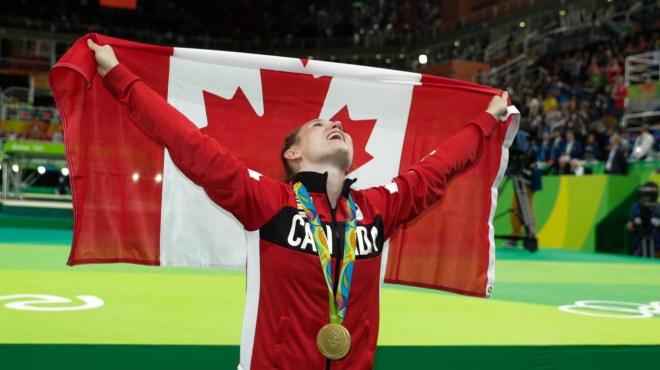 MacLennan is a graduate of the University of Toronto currently pursuing her masters in Exercise Science. She also enjoys snowboarding, skiing, and wakeboarding when she doesn’t find herself preparing for her fourth Olympic Games. MacLennan is the Vice-Chair of Team Canada’s Athletes’ Commission.

Being a self-proclaimed “natural born climber”, Sean McColl’s Olympic dreams became possible during the summer of 2016 when it was announced that sport climbing was officially added to the Olympic programme for Tokyo 2020. As president of the IFSC’s Athletes’ Commission since 2012, McColl advocated for his sport by making multiple presentations to the IOC, hoping it would lead to sport climbing’s inclusion at the Olympic Games. McColl secured his spot to Tokyo with a 10th place finish in the combined event at the 2019 IFSC World Championships. 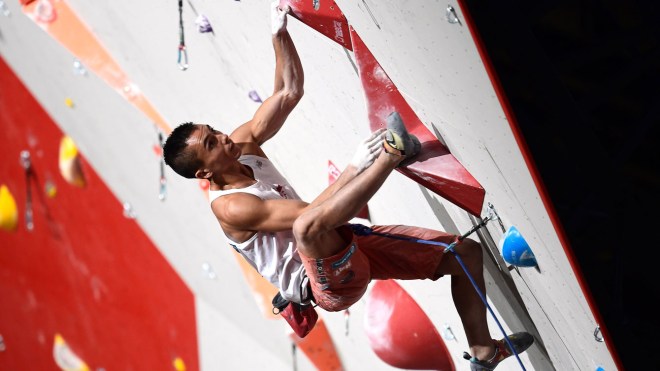 As of February 2020, McColl has earned 34 World Cup medals, with the majority in lead climbing, followed by bouldering. McColl also loves to challenge himself with unique workouts that he shares on his social accounts for anyone who wants to spice up their workout routines!

Looking to make her Olympic debut in Tokyo, Claudia Holzner was 8-years-old when she had her first artistic swimming lesson and has been hooked ever since. Holzner has competed in the team event for Canada at the Toronto 2015 and Lima 2019 Pan American Games winning gold both times.  In 2017, Holzer began partnering with Jacqueline Simoneau in the duet event and together they secured gold in Lima. 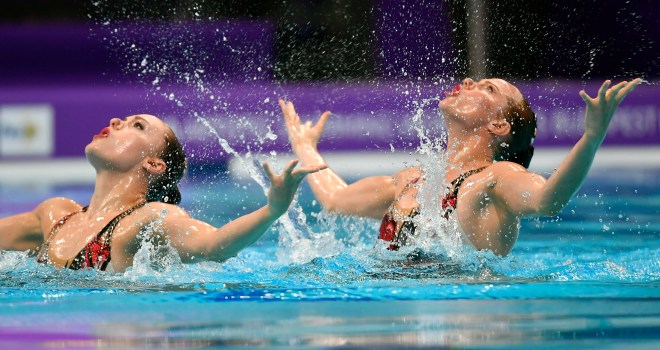 When she’s not in the pool testing out new tricks and pushing to see how long she can hold her breath, you can usually find Holzner cooking and making some do-it-yourself projects as well as hiking, skiing, and crafting. One of her favourite mottos is “she believed she could so she did”.

Check back next week to learn about another Tokyo 2020 hopeful.

Known affectionately as Kingsley, AB and Smoov, Aaron Brown is looking to book his ticket to Tokyo to compete in his third Olympic Games. He represented Team Canada at London 2012 and Rio 2016. In Rio, he was a member of the bronze medal winning 4x100m relay team, alongside Andre De Grasse, Akeem Haynes, Brendon Rodney, and Bolade Ajomale. The squad set a national record time of 37.64 seconds. Before the Games, in June 2016, Brown became the fourth Canadian man to break the 10-second barrier in the 100m, running a 9.96. 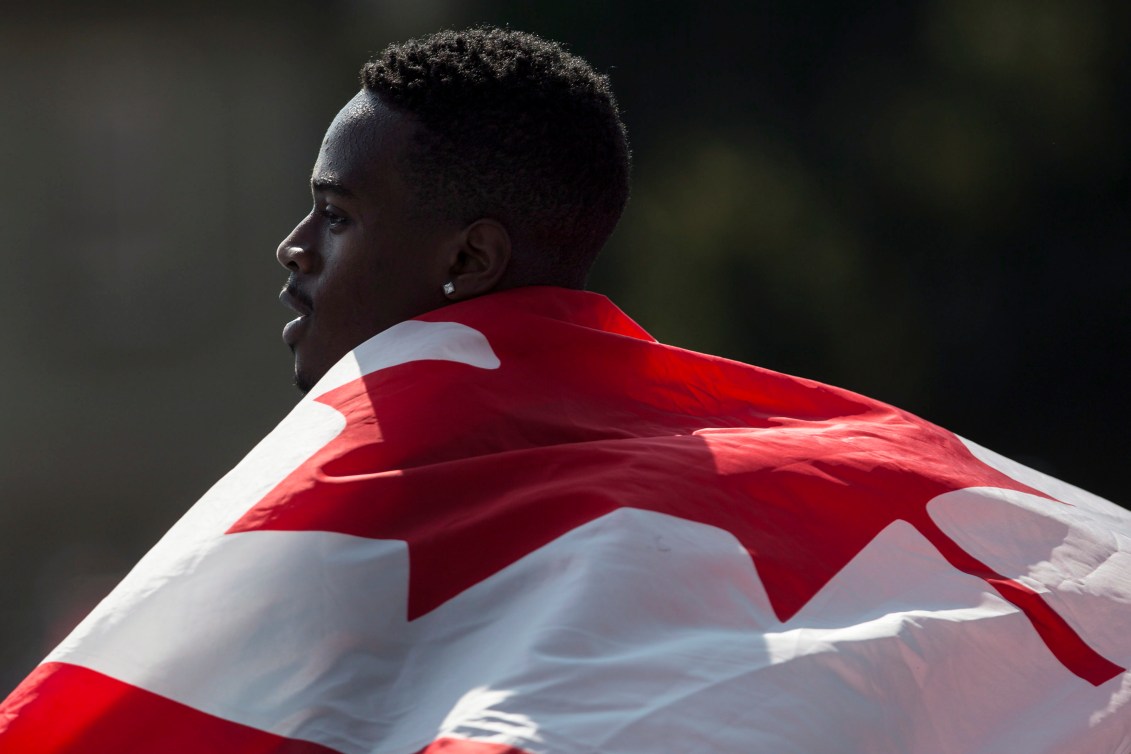 Canada’s Aaron Brown drapes himself in the Canadian flag after crossing the finish line ahead of Barbados’ Jaquone Hoyte on the anchor leg to secure a gold medal in the men’s 4×100 metre relay during the NACAC Championships in Toronto on Sunday, August 12, 2018. THE CANADIAN PRESS/Chris Young

Brown is an avid shoe collector and started 2020 off with a beautiful waterfront wedding. A motto he lives by is “to be number 1, you must train like you’re number two”.

Montrealer Annie Guglia was crowned Canadian street skateboarding champion in March 2020, Vice-Champion in 2019, and won the Empire Open title in 2018. She represents one of Canada’s best Olympic hopefuls for Tokyo 2020, where skateboarding will make its debut on the Olympic programme. In addition to being a skateboarding pro, bewteen 2015 and 2017, Annie wrote her master’s thesis on the skateboard industry. It was when doing her thesis research that she regained the taste for competition – she didn’t even consider herself as an “athlete” before this revelation. 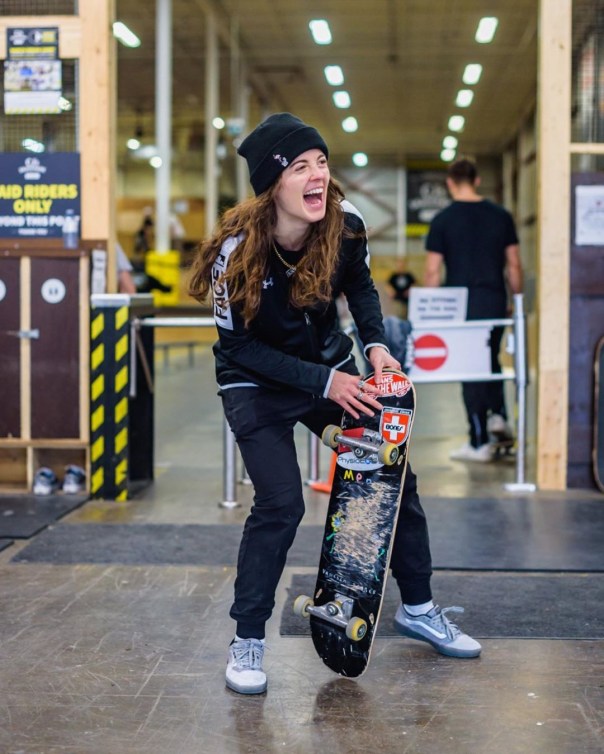 On her Instagram, she’ll show you her 🔥 skateboard skills in awesome videos, like the one below. Since Annie takes part in competitions all over the world, you will have unprecedented access to the backstage of these events, both in her posts and in her stories. Fun fact: she writes mainly in English, but she is perfectly bilingual!

Hoping to make her first Olympic appearance, Kelsey Mitchell didn’t always think it would be in track cycling. Growing up in Alberta, Mitchell was a competitive soccer player who didn’t get her start in cycling until age 23 after being discovered through the RBC Training Ground program. 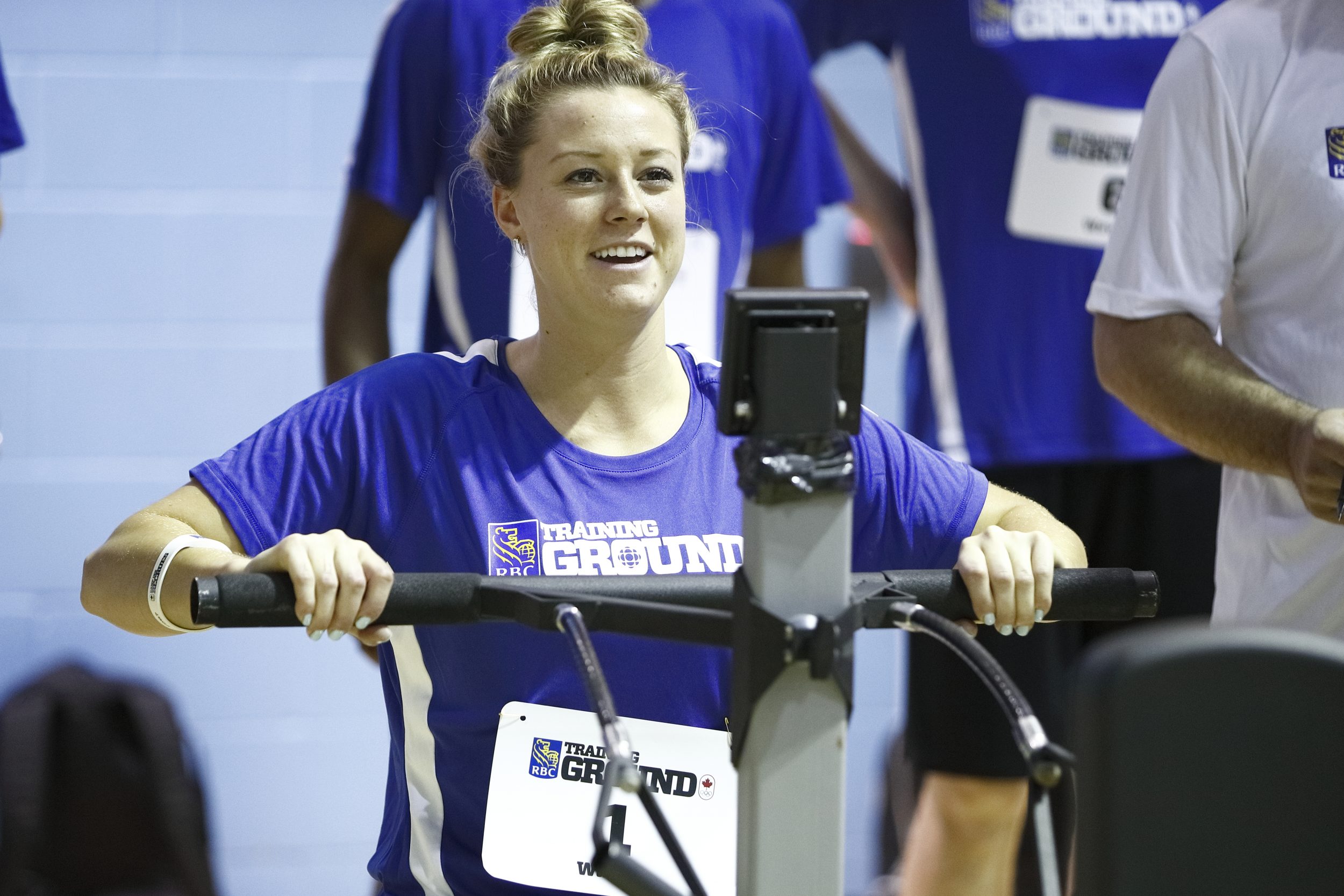 She rode her first race in February 2018 and the rest is history! After getting adjusted to competing on her own rather than with a team, Mitchell won sprint gold at the 2018 Canadian Championships as well as bronze in the keirin and 500m trial. However that wasn’t the only time she tasted victory. At the 2019 Pan Am Games in Lima, she won sprint gold in the 200m and set a world record! In January 2019, she finished sixth at her first UCI World Cup in Hong Kong. Mitchell admires the mentality and work ethic of fellow track cycler and Olympic medalist Georgia Simmerling, who was also a late transfer into the sport.

This talented 19-year-old has everyone watching. Known for breaking all the age records, Félix Auger-Aliassime is taking the tennis world by storm. It all started at 14-years-old when he made history by being the youngest to qualify for an event on the ATP Challenger Tour. Last August, he was the first player born in the 2000s to be on the main draw of a Grand Slam tournament at the US Open. 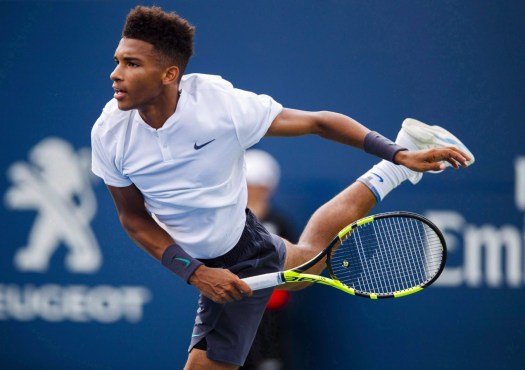 Felix Auger-Aliassime, of Canada, serves to Lucas Pouille, not shown, of France, during the first round of the Men’s Rogers Cup tennis tournament in Toronto, Tuesday, August 7, 2018. THE CANADIAN PRESS/Mark Blinch

At 18-years-old he became the youngest player to reach No. 33 in the rankings since Lleyton Hewitt on October 18, 1999. But it doesn’t stop there. In 2019, Auger-Aliassime continued to turn heads when he became the youngest ever semi-finalist at the Miami Open. The Montreal native currently ranks No. 20 in the ATP rankings and is on his way to becoming one of Canada’s next great tennis stars. Fun Fact: He is bilingual in English and en français!

Check back here every Friday for a new Team Canada athlete.