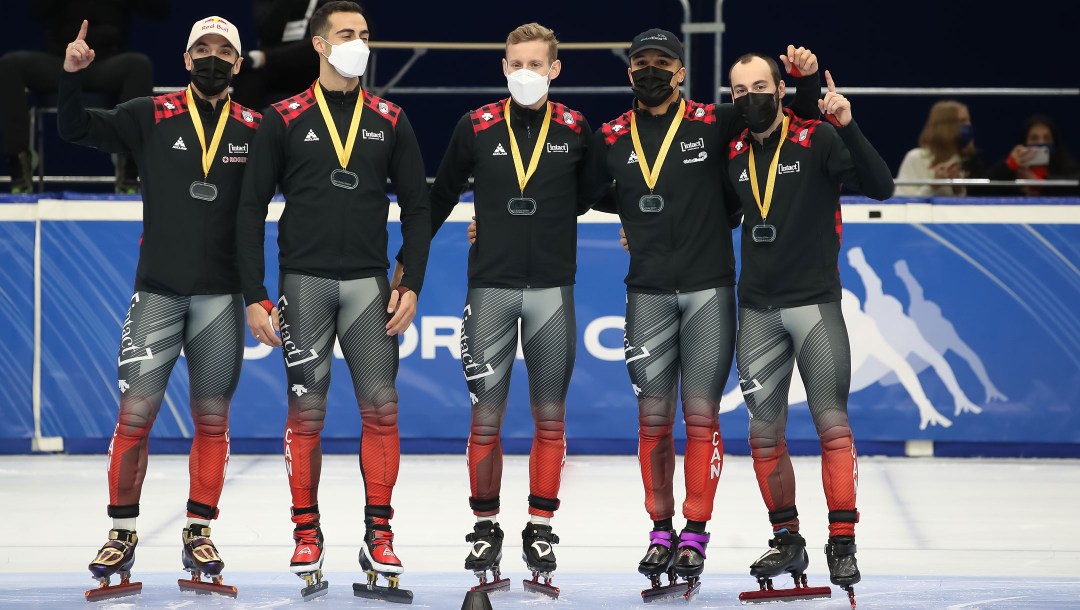 Team Canada put up podium-worthy performances across the globe this weekend. Check out some of the highlights:

On Sunday, the Canadian team added four medals to its weekend haul. Dion started the day with a silver medal in the 1000m, while the relay teams were victorious across all three distances – gold in the men’s 5000m relay along with silvers in the women’s 3000m relay and mixed 2000m relay.

The Canadians stood out at the ISU Speed Skating World Cup, winning a total of five medals in Stavanger, Norway. On Saturday, reigning world champion Laurent Dubreuil won the gold medal in the men’s 500m while Ted-Jan Bloemen won bronze in the 10,000m.

On the women’s side, Isabelle Weidemann earned the second spot on the podium in the women’s 5000m. Maddison Pearman, Alexa Scott and Ivanie Blondin added a team sprint silver to Team Canada’s haul, narrowly nudging out third place by 0.03 of a second.

On Sunday, Dubreuil earned another podium finish in the second 500m, finishing just 0.03 out of first place.

The Canadian duo of Piper Gilles and Paul Poirier earned silver at the penultimate event of the ISU Grand Prix series, the Internationaux de France, on Saturday in Grenoble. Combined with their victory a few weeks ago at Skate Canada International, they have now qualified for the Grand Prix Final taking place December 9-12.

Canada was represented on the FIS World Cup ski slopestyle podium on Saturday after Max Moffatt soared into second place in Stubai, Austria. His mom even got in on the action, proudly waving a maple leaf flag down the slope!

Christine de Bruin and Kristen Bujnowski opened the IBSF World Cup season with a third place finish in two-woman bobsleigh, while Justin Kripps and Cam Stones missed the two-man podium by just 0.01 of a second. Team Kripps went on to finish sixth in the four-man.

Cynthia Appiah and Melissa Lotholz placed fourth and fifth, respectively, in the women’s monobob while Jane Channell was the top Canadian in skeleton, finishing seventh in the women’s event.

The USA defeated Canada in overtime on Sunday, taking their first win in game three of the Rivalry Series. Marie-Philip Poulin and Sarah Fillier scored for Canada in front of a sold-out crowd in Kingston, Ontario. Hometown hero and Hockey Hall of Fame inductee Jayna Hefford was honoured ahead of the game.

The next game will take place on Tuesday at TD Place in Ottawa, at 7:00 p.m. ET. The Rivalry Series will pick up again in December in the United States.

The Canadian Curling Trials began on Saturday and will run until November 28. The teams are competing to represent Canada in the women’s and men’s curling tournaments at Beijing 2022.

Canada defeated Mexico 2-1 on November 16 at the Commonwealth Stadium in Edmonton, improving their record to four wins, four draws and no losses and earning them first place atop the Concacaf World Cup Qualifiers standings. The undefeated Canadian side is in a position to qualify for its first men’s world soccer championship in 36 years.

After securing wins over Mexico and Costa Rica, Canada has risen eight places to No. 40 in the latest FIFA world rankings, matching its highest-ever position. This year, the team has a record of 13-2-4 so far. The last time Canada was No. 40 was in December 1996.

Christine Sinclair, Stephanie Labbé and Bev Priestman were announced as nominees for The Best FIFA Football Awards™️ for 2021.

Testing out the Olympic sliding track 🛷

The first luge team relay of the season saw Team Canada finish in fifth place at the Beijing Test Event. The competition took place at the Yanqing National Sliding Centre, the venue for bobsleigh, luge and skeleton. 19-year-old Trinity Ellis led off the relay, clocking the fifth-fastest opening run down time. She was followed by Reid Watts, Tristan Walker and Justin Snith.