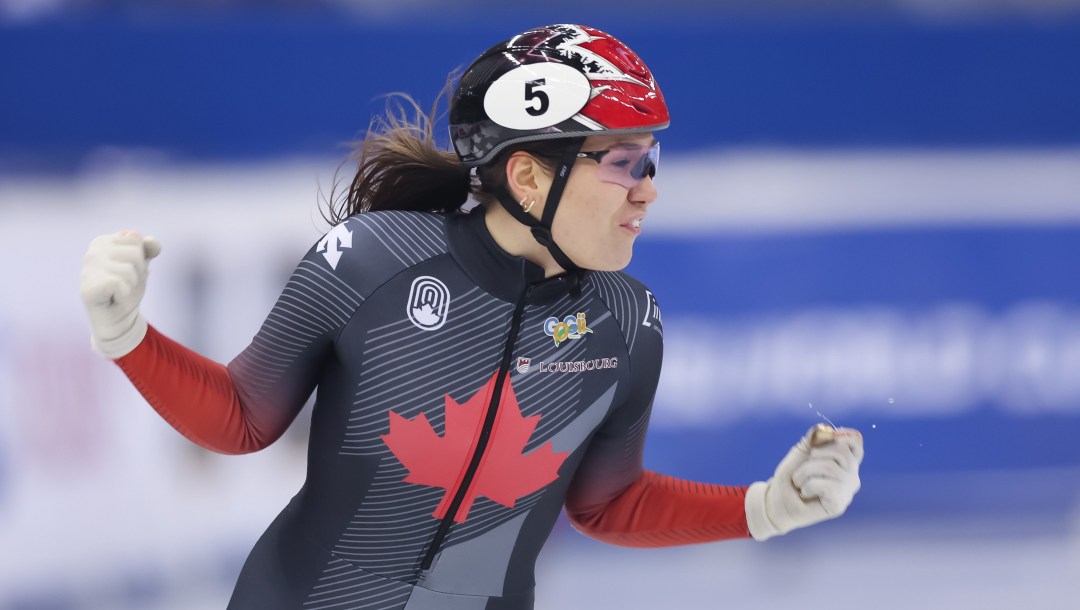 While (much of) the attention of the sporting world was focused on an incredible men’s FIFA World Cup final between Argentina and France, Team Canada was enjoying glorious moments of its own at a multitude of winter World Cup competitions.

From the 12 combined medals won by the short track and long track speed skating teams to the trifecta of double podiums south of the border in freestyle skiing to a historic moment on the luge track, there were a lot of Canadian stars shining on the world stage this weekend.

Team Canada closed out its time in Kazakhstan with a five medal weekend at the ISU Short Track Speed Skating World Cup.

On Saturday, Courtney Sarault won her second gold in as many weeks, adding a 1500m victory to the one she earned in the 1000m last weekend in Almaty, as she overtook Belgium’s Hanne Desmet with a nifty pass at the finish line.

The men’s 5000m relay won their third straight World Cup gold medal as, once again, Jordan Pierre-Gilles executed a pass on the final corner to secure the victory for his teammates William Dandjinou, Pascal Dion, Maxime Laoun, and Steven Dubois in a tight finish against the Netherlands.

Dubois also won two individual medals this weekend, taking silver in the first 500m race on Saturday and silver in the 1000m on Sunday. The women’s 3000m relay team of Danaé Blais, Kim Boutin, Sarault, and Renee Steenge won their own silver medal.

There is now a lengthy break before the World Cup circuit resumes February 3-5 in Dresden, Germany.

For a second straight week, the Canadian long track speed skating team thrilled the home crowd at the Olympic Oval in Calgary.

The excitement kicked off on Friday, as Ivanie Blondin won bronze in the 5000m. She raced in the final pairing and did what she needed to get herself on the podium with her time of 6:54.81. It is Blondin’s fifth career World Cup medal in the distance, but her first since the 2019-20 season. Christopher Fiola, Laurent Dubreuil, and Antoine Gélinas-Beaulieu followed up with a bronze in the men’s team sprint.

On Saturday, Laurent Dubreuil added a bronze in a tightly contested 500m, keeping alive his podium streak in all four World Cup races to start the season. Blondin, Carolina Hiller and Brooklyn McDougall won silver in the women’s team sprint.

The final day of racing on Sunday saw three Canadians win mass start medals. Blondin collected her third medal of the weekend with a silver, while Connor Howe and Hayden Mayeur shared the podium by winning silver and bronze, respectively. It is Mayeur’s first career individual World Cup medal.

This weekend also marked the return of Ted-Jan Bloemen, who took some time off this fall for the birth of his son. Racing in the B division of the 10,000m, his time of 12:33.75 was a personal best, Olympic Oval track record, and just three seconds off the current world record. He would have won the gold medal by more than 11 seconds had he been racing in the A division. He was placed in the B division after being disqualified from the 5000m last week due to two false starts.

There wasn’t a lot of room on the podium for other countries at the FIS Freestyle World Cup in Copper Mountain, Colorado after some stellar performances by Team Canada athletes.

On Friday, Megan Oldham claimed gold while Olivia Asselin captured bronze in women’s ski big air. It was Oldham’s first career World Cup medal in the discipline, while it was Asselin’s first World Cup podium ever.

READ: Double-double on the halfpipe

There was a 1-2 Canada finish on Saturday as Rachael Karker took home gold in the women’s ski halfpipe and was joined on the podium by Amy Fraser, who won the silver for her first career World Cup medal.

There were also some snowboard competitions happening in Copper Mountain and in the women’s halfpipe Elizabeth Hosking grabbed the silver medal for her first career World Cup podium.

Mikael Kingsbury picked up his fourth podium in as many events to start the FIS World Cup season as he won moguls silver in Alpe D’Huez, France on Friday. He was topped by longtime rival Ikuma Horishima of Japan who finished with 82.66 points, while Kingsbury was just behind with 80.85 points. Kingsbury had not missed an international podium in more than a year before he finished 29th in the dual moguls on Saturday.

READ: Fourth straight podium for Mikaël Kingsbury to kick off the moguls season

Megan Farrell earned her first career World Cup medal in parallel giant slalom when she took bronze in Cortina d’Ampezzo on Saturday. Farrell edged out Italy’s Lucia Dalmasso in the small final. In March, Farrell had stood on a World Cup podium for the first time in her career when she won silver in the non-Olympic parallel slalom event, setting the stage for this weekend’s breakthrough.

No Canadian had won a World Cup medal in PGS since Jasey-Jay Anderson in January 2018. The last Canadian woman to win a World Cup PGS medal was Caroline Calvé in December 2014.

Caitlin Nash and Natalie Corless made history this weekend by becoming the first Canadians to win a World Cup medal in women’s doubles luge. The moment came at the FIL World Cup in Park City, Utah.

READ: A historic bronze medal in luge for Caitlin Nash and Natalie Corless

Nash and Corless, who at 19 were the youngest athletes in the field, clocked in at 1:28.955 to win bronze. They moved up from sixth place after their first run by posting the second fastest time in the second run. Women’s doubles luge is part of the World Cup circuit for the first time this season, ahead of its Olympic debut at Milano Cortina 2026.

Bobsleigh and Skeleton: Near podiums in Lake Placid ❄️

Although there were no Canadians on the podium this weekend at the IBSF World Cup in Lake Placid, there were some impressive results.

Bianca Ribi and Niamh Haughey raced to a career-best fourth-place finish in two-woman bobsleigh, coming just 0.34 of a second shy of the podium. Cynthia Appiah and Erica Voss finished seventh. Ribi had placed sixth in the monobob while Appiah was ninth, dropping from fourth after the first run. Appiah’s sled overturned in her second run and slid on its side for a while before righting itself just before the finish.

The team of Taylor Austin, Shaquille Murray-Lawrence, Mathieu Gosselin, and Cyrus Gray finished tied for sixth in the four-man bobsleigh, while Austin and Gray raced to ninth in the two-man. In skeleton, the top Canadian was Mirela Rahneva who placed eighth in the women’s race.

Jack Crawford had a great weekend on the classic Saslong course in Val Gardena, Italy. He finished seventh in the downhill on Thursday and then topped that with a fifth place finish in another downhill on Saturday. That gives him four top-10 finishes on the FIS World Cup circuit so far this season and it is his third straight time placing in the top seven in a downhill race.

Canada won 14 medals at the FINA World Swimming Championships in Melbourne, Australia. This meet is held in a 25m pool, half the length of an Olympic-length pool. Leading the way was Maggie Mac Neil, who finished with three individual gold medals (50m butterfly, 50m backstroke, 100m butterfly), set two world records (50m backstroke, 100m butterfly), and was part of three relay bronze medals. She was named Best Female Athlete of the meet.