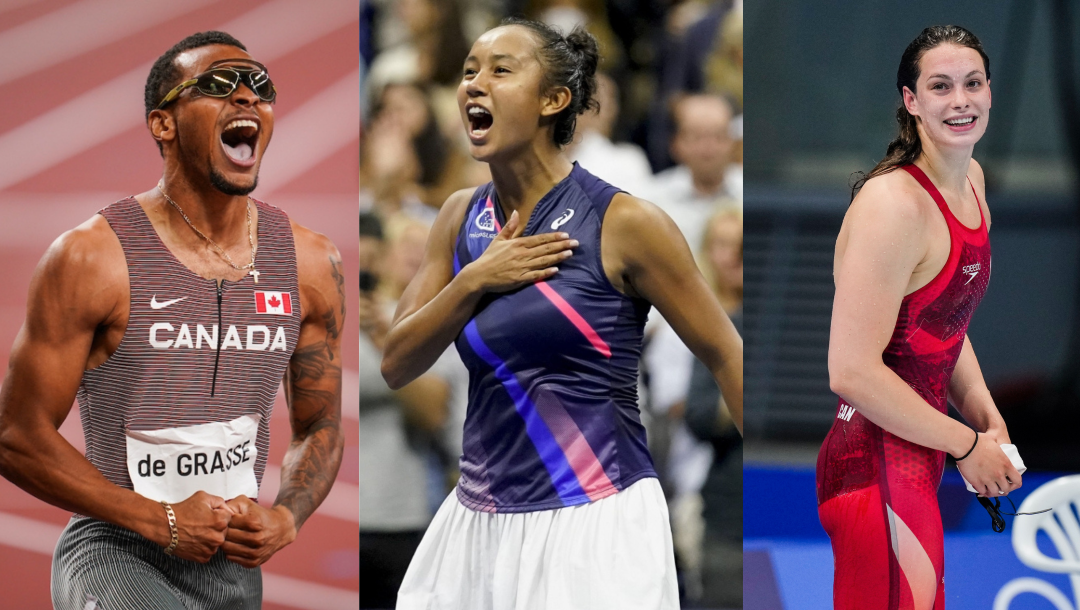 Amid unprecedented circumstances, the Tokyo 2020 Olympic Games were held a year later than the usual quadrennial schedule due to the COVID-19 pandemic.

But the interruptions to training and competition did not stop Team Canada from making history as our athletes collected 24 medals in Tokyo — the country’s second-best total ever at one Summer Games.

This year also featured a return to almost normalcy for the competition calendar after it was severely impacted by COVID-19-related cancellations in 2020. Through all the ups and downs, there were plenty of Canadians who shined on the world’s brightest sports stages and put themselves into consideration for various year-end honours.

Here are a few of the top candidates, presented in alphabetical order:

Canada’s current fastest man didn’t stand in the shadows of Usain Bolt during Tokyo 2020. Andre De Grasse took gold in the men’s 200m with a Canadian record time of 19.62 seconds.

DeGrasse also claimed bronze in the 100m and was the anchor of the men’s 4x100m relay team that captured bronze for the second consecutive Olympics. De Grasse doubled his career Olympic medal total to six – ranking him second all-time among Canadian Olympians – and has never missed the Olympic podium.

Laurent Dubreuil will be primed for the Beijing 2022 Olympic Winter Games following the best season of his career. In February, he became just the second Canadian man to win the 500m world title in long track speed skating. He also won 1000m bronze at the 2021 World Single Distances Championships. That capped a great performance in the Heerenveen bubble, which included four World Cup medals. Did we forget to mention he reached the podium in the first four 500m World Cup races to start the 2021-22 season?

Fans of Team Canada barely had time to digest the success of Tokyo 2020 before another young phenom took the spotlight. 19-year-old Leylah Fernandez made a run for the ages to the U.S. Open final before being defeated by Emma Raducanu of Great Britain. She took down three top-five seeds en route to the final. Fernandez also won her first WTA title earlier in 2021 at the Monterrey Open and saw her international ranking climb from 88th to 24th before the year was done.

Canadian moguls star Mikaël Kingsbury had another great finish to his 2021 season, despite adversity at the start.

Kingsbury fractured his T4 and T5 vertebrae while training in Ruka, Finland in December 2020. Despite missing his first World Cup start in his 10-year career, his return proved why he’s a generational talent. He earned two World Cup wins on consecutive days and followed it up with two gold medals at the 2021 Freestyle World Ski Championships. Going four-for-four is a pretty decent comeback.

At Tokyo 2020, Jessica Klimkait became the first Canadian woman to win an Olympic medal in judo. Klimkait captured the bronze after defeating Slovenia’s Kaja Kajzer by way of waza-ari. Her bronze medal came one month after she won gold at the world championships in Budapest, which made her world number one in the women’s 57kg division rankings.

Maggie Mac Neil’s Olympic debut at Tokyo 2020 was nothing short of spectacular. A day after she helped Canada claim silver in the 4x100m freestyle relay, Mac Neil captured gold in the 100m butterfly, setting a Canadian record with a time of 55.59 seconds. She finished off the Games with a bronze medal as a part of the women’s 4x100m medley relay. The world was on notice as she was also recognized for her achievements at the Association of National Olympic Committee (ANOC) Awards, earning the prestigious honour of the Best Female Athlete of Tokyo 2020.

Kylie Masse was among the Canadian swimmers who cleaned up during Tokyo 2020. After claiming bronze in the women’s 100m backstroke at Rio 2016, she upgraded to a silver in Tokyo and claimed silver in the women’s 200m backstroke. She also took home bronze in the 4x100m medley relay for her third medal of the Games. Masse was just the fourth woman to ever finish as runner-up in both backstroke events at the same Olympic Games.

Rising track cycling star Kelsey Mitchell reached the pinnacle of the sport just three years after her first ride on a velodrome. During her Olympic debut, she captured gold in the women’s sprint on the final day of competition at Tokyo 2020 – becoming Canada’s second ever Olympic champion in any track cycling event.

Her remarkable feat was a true story of inspiration, with her having been recruited by Cycling Canada just a few years earlier after she attended RBC Training Ground. Mitchell followed that up with her first career world championship medal, winning bronze in the women’s sprint event at the UCI Track Cycling World Championships in October.

Penny Oleksiak became Canada’s all-time most decorated Olympian at Tokyo 2020. After her four medals at Rio 2016, Oleksiak started her second Olympic Games with a silver in the 4x100m freestyle relay as the anchor swimmer. She then added a bronze in the 200m freestyle and a bronze in the 4x100m medley relay, increasing her career total to seven Olympic medals. Oleksiak also came within 0.07 of a second of another medal when she finished fourth in the 100m freestyle, setting a Canadian record time of 52.59 seconds.

The unofficial title of World’s Greatest Athlete belonged to a Canadian after decathlete Damian Warner claimed gold at Tokyo 2020, breaking both the Canadian and Olympic records in the process. With a score of 9018, he became the first Olympic decathlon champion to eclipse the 9000-point mark in their victory. He also broke Olympic decathlon records in the 100m (10.12 seconds), long jump (8.24m), and 110m hurdles (13.46 seconds) in the process. His remarkable performance earned him the honour of being Team Canada’s flag bearer for the Closing Ceremony, the first track and field athlete to be named since 1976.

We also want to highlight two great contenders for Team of the Year, an award presented by the Canadian Press in addition to their Male and Female Athletes of the Year awards.

Canada’s performance at Tokyo 2020 was epitomized by the women’s soccer team’s run to an historic Olympic gold medal. Though it was 20-year-old Julia Grosso’s goal in a penalty shootout against Sweden that sent the entire nation into a celebration (that’s still ongoing), the team had many standout performances over the course of the tournament.

The overwhelming narrative was Christine Sinclair cementing her legacy as one of the greatest soccer players of all time with a gold medal. Sinclair earned a crucial penalty kick in the gold-medal final, which was subsequently netted home by Jessie Fleming.

Canada wouldn’t be in the position they were in without goaltender Stephanie Labbé. She earned three clean sheets and conceded just five penalty kick goals out of a possible 12 throughout the tournament – an otherworldly rate of stops in some really tight games. Her performance earned her the unofficial title of the Minister of Defence.

The run also carried significance beyond the field of play, as midfielder Quinn became the first openly transgender or non-binary athlete to win an Olympic medal.

Canada claimed its first women’s world hockey title in nine years after beating the U.S. in overtime of the gold medal game at the 2021 IIHF Women’s World Championship.

Marie-Philip Poulin netted a wrist shot into the top of the net seven minutes into overtime to win the tournament for Canada. The goal was initially waved off by an official, but the delayed celebration ensued upon review.

The U.S. went in as the favourites, having won five straight world titles as well as the 2018 Olympic gold medal. But something started in group play when Canada ended the States’ 29-game win streak at the worlds.

Canada went unbeaten throughout the championship in Calgary, outscoring opponents by a total of 27 goals in seven games.