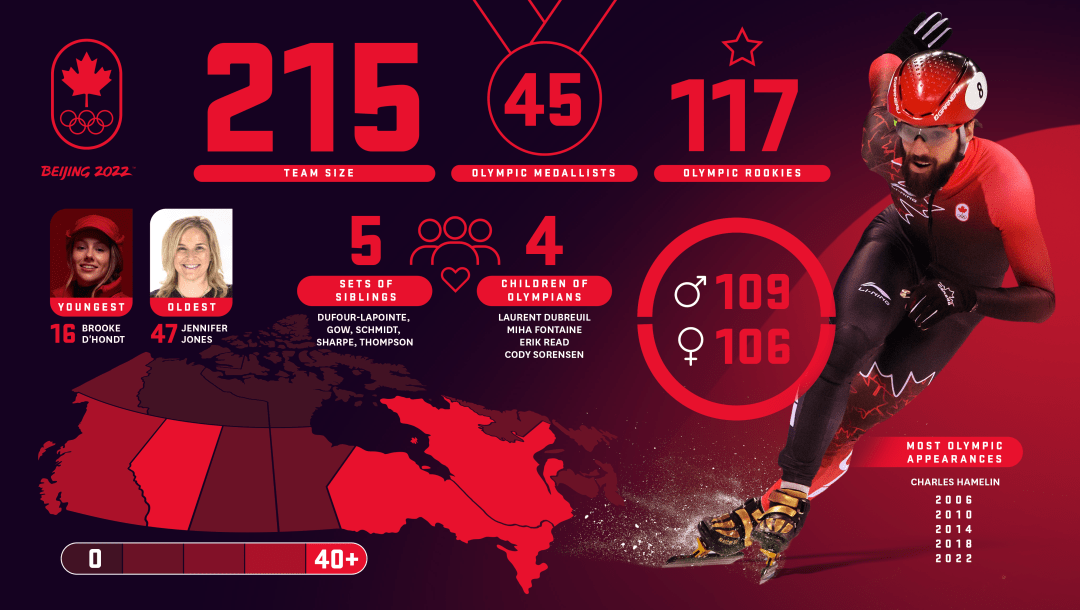 Team Canada will have 215 athletes competing in 14 sports at the Beijing 2022 Olympic Winter Games.

This is Canada’s third largest Winter Olympic team ever, just behind the 225 athletes named for PyeongChang 2018 and the 222 who competed at Sochi 2014.

The team does make history as the most gender balanced that Canada has ever had at the Olympic Winter Games, with 106 women — Canada’s most ever for a Winter Games – and 109 men.

There are 117 first time Olympic team members while 91 athletes are returning from PyeongChang 2018. The team includes 45 Olympic medallists.

Three athletes – Charles Hamelin, Brad Gushue, Mark Nichols – made their first Olympic appearances 16 years ago at Turin 2006. While Beijing 2022 will mark the first return for Gushue and Nichols, Hamelin is headed to his fifth straight Olympic Winter Games.

There are 13 alumni of the Winter Youth Olympic Games on the roster, including three athletes – Florence Brunelle, Natalie Corless and Liam Gill — who competed at Lausanne 2020.

Read on for some more fun facts and stats about Team Canada’s Olympic squad.

At 47 years old, Jennifer Jones will become Canada’s oldest female Winter Olympian ever when she steps on the ice as the skip of the women’s curling team.

Another curler, John Morris, turned 43 in December, making him the oldest man on Team Canada in Beijing.

The youngest athlete on the team is halfpipe snowboarder Brooke D’Hondt, who will be 16 until her birthday on March 9. Aerials skier Émile Nadeau, who just turned 18 on January 13, is the youngest man on the team.

There are five sets of siblings who will be part of Team Canada in Beijing.

Chloé and Justine Dufour-Lapointe will compete against each other in women’s moguls for the third straight Games. They memorably shared the podium at Sochi 2014.

Christian and Scott Gow will be biathlon teammates again in their second Olympic Games together.

Hannah and Jared Schmidt will both be making their Olympic debuts in the women’s and men’s ski cross events, respectively.

As they did in PyeongChang, Broderick Thompson will compete in men’s alpine skiing while his sister Marielle looks to add to her Olympic gold medal from Sochi 2014 in women’s ski cross.

There are five athletes on Team Canada who will be second generation Olympians.

Long track speed skater Laurent Dubreuil once again follows in the footsteps of both his father, Robert Dubreuil (Albertville 1992) and mother, Ariane Loignon (Calgary 1988). As the reigning 500m world champion, he’ll look to be the first Olympic medallist in the family.

After last competing at Sochi 2014, bobsledder Cody Sorensen decided to take one more go at the Olympic Games this season. His father Ole Sorensen competed in wrestling at Munich 1972.

Aerialist Miha Fontaine is making his Olympic debut at 18 years old. He competes in the same event in which his father Nicolas Fontaine won silver at Albertville 1992 where aerials was a demonstration sport. The elder Fontaine went on to make three official Olympic appearances at Lillehammer 1994, Nagano 1998, and Salt Lake City 2002.

All 10 provinces and one territory will have athletes proudly representing them at Beijing 2022.

Fifty-nine members of Team Canada hail from Ontario, with Quebec just behind with 57 athletes. They are followed by Alberta, with 41 athletes, and British Columbia, with 32.

Manitoba has nine athletes, Saskatchewan has six, Nova Scotia has four, and Newfoundland and Labrador has three. New Brunswick, Prince Edward Island and Yukon are each the home of one athlete.

One athlete, figure skater Keegan Messing, is a dual citizen of the United States who makes his home in Alaska.

History in the Making

Canada has won all three Olympic gold medals ever awarded in women’s ski cross, thanks to Ashleigh McIvor at Vancouver 2010, Marielle Thompson at Sochi 2014, and Kelsey Serwa at PyeongChang 2018. Thompson will be back in Beijing, along with teammates Courtney Hoffos, Brittany Phelan and Hannah Schmidt, all of whom have proven their podium potential.

Canada has won the last three Olympic gold medals in men’s moguls. After Alex Bilodeau went back-to-back at Vancouver 2010 and Sochi 2014, Mikaël Kingsbury will be looking to follow up his PyeongChang 2018 victory with another trip to the top of the podium.

Mark McMorris looks to become the only man to stand on all three Olympic snowboard slopestyle podiums.

John Morris and Kaitlyn Lawes are both aiming to become the first three-time Olympic gold medallists in curling, as Morris competes in mixed doubles and Lawes competes in the women’s tournament.