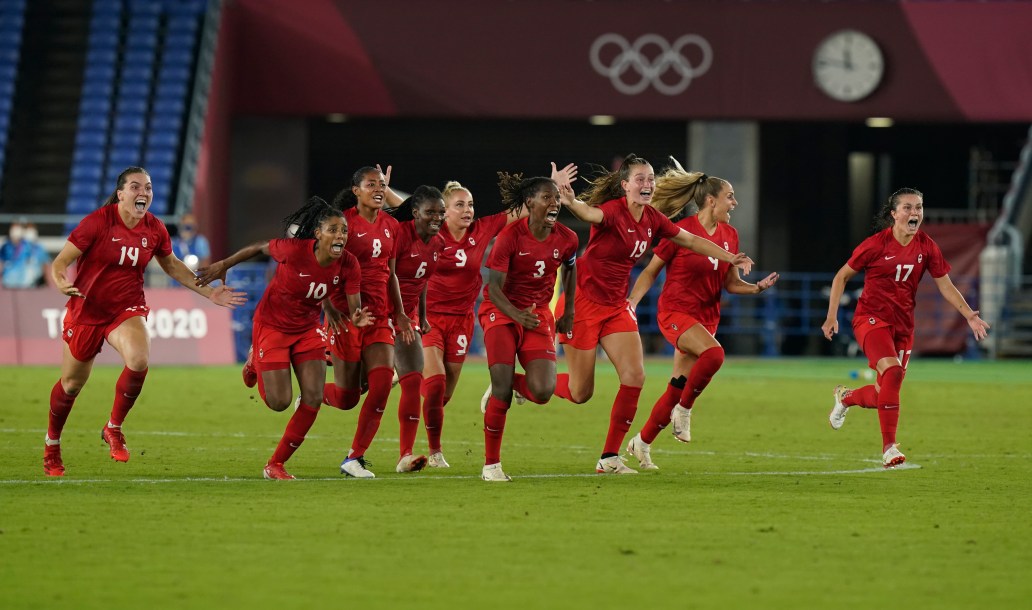 At Tokyo 2020, there were many memorable moments featuring Team Canada athletes, from the first medals won in the pool to a historic gold in women’s soccer. Here’s how the athletes themselves recalled many of those moments just hours after they competed and had an experience of a lifetime.

Swimming to the first (of six!) medals in the pool

Team Canada equalled its Rio 2016 total with six medals in swimming, one of the country’s best-ever hauls at a single Olympic Games. The quartet of Kayla Sanchez, Maggie Mac Neil, Rebecca Smith and Penny Oleksiak kicked it off by winning silver in the 4x100m freestyle relay, which was also Canada’s first medal of Tokyo 2020.

Jennifer Abel and Mélissa Citrini-Beaulieu in sync for silver

The unbreakable bond of Jennifer Abel and Mélissa Citrini-Beaulieu was on front row display at Tokyo 2020. Their heartwarming reaction to winning silver was one of the great moments Summer Games.

Maggie Mac Neil caught the attention of the world when she defeated Rio 2016 Olympic champion Sarah Sjöström for gold in the 100m butterfly at the 2019 FINA World Championships. She proved that was no fluke when she won gold in the same event at Tokyo 2020.

After a 13-year absence, softball made its return to the Olympic Games at Tokyo 2020. Team veterans Jenn Salling and Larissa Franklin recall how Team Canada narrowly beat out Mexico 3-2 to earn bronze.

Catherine Beauchemin-Pinard decided to move up a weight class for Tokyo 2020, citing an improvement both in competition and overall wellness. It proved to be the right decision as she won a bronze medal in the 63kg event.

Rowing together to the podium

Years of uncertainty and injury finally paid off for the rowing pair of Caileigh Filmer and Hillary Janssens. The duo not only won bronze, but also broke a Canadian record in the semifinal.

Because of the COVID-19 pandemic, no one in the women’s eight had raced internationally for about two years before landing in Tokyo. That didn’t stop the women’s rowing eight (Lisa Roman, Kasia Gruchalla-Wesierski, Christine Roper, Andrea Proske, Susanne Grainger, Madison Mailey, Sydney Payne, Avalon Wasteneys, Kristen Kit) from picking up gold after rowing a Canadian best-ever time of 5:53.73 in the repechage.

Ellie Black gives it her all

Canada’s most successful female artistic gymnast added another impressive result to her resumé. Ellie Black may have ended up just short of the podium in Tokyo, finishing fourth in the balance beam final, but that came after she had suffered an ankle injury earlier in the Games. A true story of perseverance.

There were a long list of worthy candidates for Canada’s flag bearer in the closing ceremony, but owning the unofficial title of World’s Greatest Athlete may have been the deciding factor.

Damian Warner became Canada’s first ever Olympic champion in decathlon and broke the Olympic record on his way to the podium.

A historic moment for women’s soccer

In one of the major highlights of Tokyo 2020, the women’s soccer team won the gold medal after defeating Sweden in a penalty shootout when regulation and extra time couldn’t break a 1-1 tie. Twenty-year-old Julia Grosso scored the decisive penalty kick to lift Team Canada to the historic victory. Watch Grosso and Janine Beckie relive the moment.

Canada took home its second straight Olympic medal in the men’s 4x100m relay by earning bronze at Tokyo 2020. The team of Aaron Brown, Jerome Blake, Brendon Rodney, and Andre De Grasse defended the Rio 2016 bronze medal performance with an identical result and vowed to be ever faster in the next Olympics.

Walking 50km to the Olympic podium

Evan Dunfee took home Canada’s first ever Olympic medal in the longest athletics event, winning bronze in the Tokyo 2020 50km race walk. Dunfee crossed the finish line with a time of 3 hours 50 minutes and 59 seconds after making a late move.