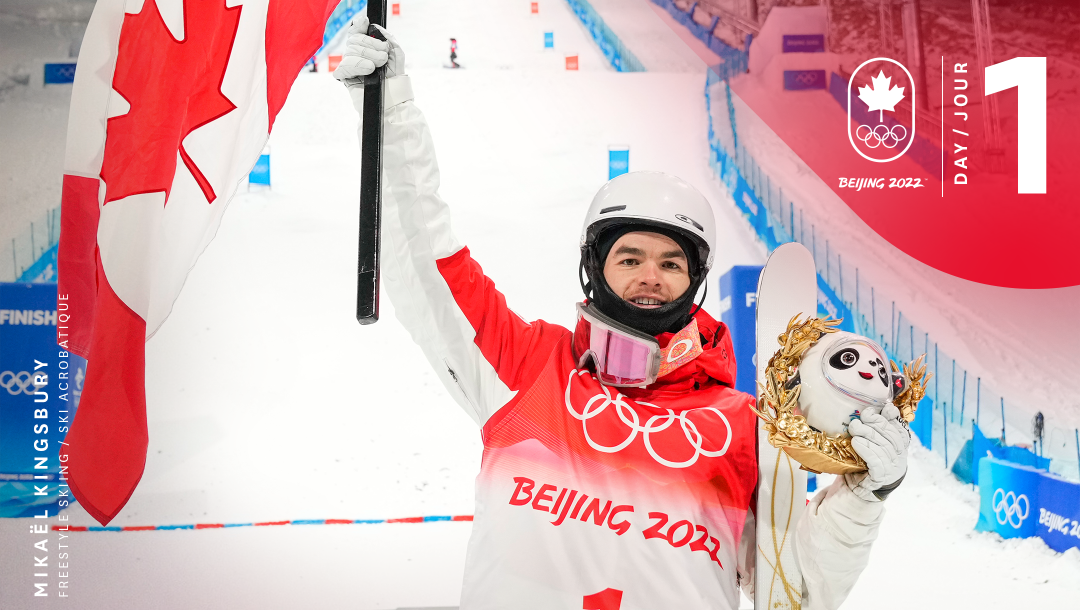 The Olympic flag has been raised, the flame is burning bright, and the Games are officially underway.

The first medal events took place and Canadians reached the podium in two of them.

The king of the moguls came away with the silver medal after Canada’s first medal of Beijing 2022 was won on the speed skating oval.

Read on to know more about what you might have missed.

Mikaël Kingsbury won his third straight Olympic medal in men’s moguls, taking the silver medal. He scored 82.18 points in the superfinal to finish just behind Swede Walter Wallberg, who scored 83.23 points for the victory. Kingsbury becomes Canada’s most decorated Olympic freestyle skier ever and is just the second freestyle skier in the world to win three Olympic medals.

Team Canada’s first medal of Beijing 2022 came at the Ice Ribbon (officially the National Speed Skating Oval) in the women’s 3000m, courtesy of Isabelle Weidemann who won the bronze medal. Her time of 3:58.64 put her on the bronze medal step of the podium behind Dutchwoman Irene Schouten and Italian Francesca Lollobrigida.

The action on the small oval began with the heats of the women’s 500m and the men’s 1000m. Kim Boutin, second in the World Cup 500m standings and reigning Olympic bronze medallist, was joined by Florence Brunelle and Alyson Charles who are making their Olympic debuts. All three advanced to the quarterfinals which will take place Monday.

Pascal Dion won the World Cup title in the 1000m this season after winning medals in three of four races. Jordan Pierre-Gilles was also on the start line for his Olympic debut. Both men have also moved onto Monday’s quarterfinals.

Also on the schedule was the Olympic debut of the mixed relay. Canada advanced through the quarterfinals and semifinals to race for the medals. However, Canada was penalized for a push from behind in the A final, ranking them sixth overall.

After opening with a dominant 12-1 win over Switzerland, Team Canada’s firepower did not shut down against Finland. Five different players scored in an 11-1 victory. Sarah Nurse and Brianne Jenner each had hat tricks while Sarah Fillier and Laura Stacey each scored twice. Jamie Lee Rattray added one. Fillier now has four goals and five points in her first two games on Olympic ice. Natalie Spooner added four assists and now has nine points.

Rachel Homan and John Morris dropped their first match of the day 6-2 to Sweden in a game that was final after six ends. The big end for the Swedes was the fourth when they scored three. But Canada rebounded in a critical game against the United States, taking a 7-2 victory to put their record at 4-2. That puts them in a two-way for third place and keeping their hopes alive of being among the four teams that advance to the semifinals.

The first event in biathlon was the mixed 4x6km relay which features two men and two women per team. Racing for Canada were Sarah Beaudry, Emma Lunder, Christian Gow, and Scott Gow who finished 14th.

The cross-country skiing competition kicked off with the women’s skiathlon. Three Canadians ended up in the top-30 as Cendrine Browne placed 20th, Katherine Stewart-Jones finished in 23rd and Dahria Beatty came through in 28th. Olivia Bouffard-Nesbitt rounded out the Canadians in 44th place.

Mackenzie Boyd-Clowes and Matthew Soukup competed in qualification for the men’s individual normal hill and both were among the top 50 who advanced into the first round which take place on Day 2. In his fourth Olympic appearance, Boyd-Clowes scored 97.1 points to qualify in 17th place. Making his Olympic debut, Soukup qualified in 47th place.

Alexandria Loutitt and Abigail Strate competed in the women’s individual normal hill. Strate placed 26th in the first round to move onto the final round and finished 23rd in her Olympic debut. She scored a total of 161.9 points for her two jumps, but had ranked 12th in just the final jump. Loutitt was unfortunately disqualified from the first round because she was too light to meet the required weight to ski length ratio.

Laurie Blouin, Jasmine Baird, and Brooke Voigt competed in the qualification round of women’s slopestyle. Blouin was the only one of the three to be amongst the top 12 advancing to the final. The reigning Olympic silver medallist qualified in seventh place with her score of 71.55 points for her second run. Unfortunately Baird and Voigt had difficulties with both of their qualification runs and finished 15th and 22nd, respectively. The final will take place Sunday morning in Beijing (Saturday night in Canada).

“I went with a more relaxed, easy approach as I don’t need to pull out my big tricks just yet. The goal isn’t to win qualification but rather to win the final,” said Blouin.

Reid Watts was the first Canadian slider in action at the Yanqing Sliding Centre for the first two runs of the men’s singles luge event. He sits in 17th place, 2.619 seconds back of the leader heading into runs three and four which will follow on Day 2.