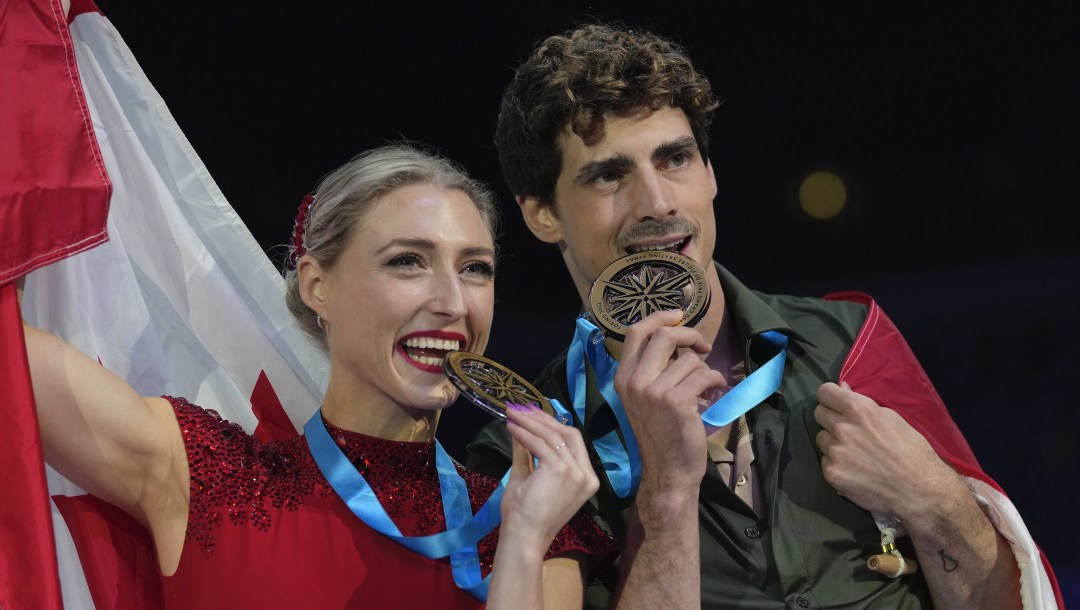 Mikaël Kingsbury collected back-to-back moguls medals, two snowboarders soared their way to World Cup breakthroughs, and we almost lost count of all the speed skating medals from Calgary and Kazakhstan.

Piper Gilles and Paul Poirier danced off with their first career medal from the ISU Grand Prix of Figure Skating Final — and it was gold. After finishing on the top step of the podium at both of their assigned Grand Prix events, they posted an overall score of 215.64 on Saturday in Turin, Italy. That gave them the victory by 3.7 points over Americans Madison Chock and Evan Bates at the biggest competition of the season thus far.

Fellow Canadians Laurence Fournier Beaudry and Nikolaj Soerensen (196.15) finished sixth in their debut at the Grand Prix Final. In the pairs competition, Deanna Stellato-Dudek and Maxime Deschamps finished just off the podium in fourth place, missing the bronze medal by 2.74 points. Focus will now shift to preparing for the Canadian Championships in Oshawa, Ontario in mid-January.

Mikaël Kingsbury collected two medals over the weekend at the FIS Freestyle World Cup in Idre Fjäll, Sweden. On Saturday he won his 106th World Cup medal, capturing silver in the men’s moguls. He upgraded that result to gold on Sunday in the men’s dual moguls, which will be an Olympic event for the first time at Milano Cortina 2026.

Canadians flew to two medals at the FIS Snowboard Big Air World Cup at Commonwealth Stadium in Edmonton. Jasmine Baird put on an incredible display for her first career World Cup victory. Baird set the tone with the first of her three runs in the final and finished with a two-trick score of 159.50, to take the gold by 13 points. Laurie Blouin finished sixth with 125.00 points.

Canadians collected eight medals during the two days of finals at the ISU Short Track Speed Skating World Cup in Almaty, Kazakhstan. It started on Saturday when Courtney Sarault won gold in the women’s 1000m for her first career individual World Cup victory. In the men’s 1000m, Pascal Dion and Jordan Pierre-Gilles shared the podium, winning silver and bronze, respectfully.

Sunday became a five medal day, which included Kim Boutin racing to gold in the women’s 500m. Boutin then teamed up with Sarault, Rikki Doak, and Claudia Gagnon to capture gold in the women’s 3000m relay after a pair of silvers to start the season. Sarault added a silver medal in the women’s 1500m for her second individual podium of the weekend.

The men’s 5000m relay team of Steven Dubois, Maxime Laoun, Pierre-Gilles and Felix Roussel also won gold as Pierre-Gilles made an incredible pass heading into the final corner to get the victory. Dion earned a second individual medal of the weekend, claiming bronze in the men’s 1500m. The World Cup circuit will remain in Almaty for one more weekend.

There was still more success on home ice at the ISU Speed Skating World Cup in Calgary.

On Saturday, Laurent Dubreuil skated to his second straight victory in the men’s 500m, crossing the line in 34.017 seconds. Ivanie Blondin, Valérie Maltais and Isabelle Weidemann posted a time of 2:54.492 in the women’s team pursuit to claim Canada’s second gold medal of the weekend. In the men’s team pursuit, Connor Howe, Antoine Gélinas-Beaulieu and Hayden Mayeur raced to the silver medal on Friday to kick start the podium parade.

On Sunday, Dubreuil and Gélinas-Beaulieu shared the podium in the men’s 1000m. Dubreuil clocked 1:07.307 for silver while Gélinas-Beaulieu posted 1:07.325 for the bronze medal — his first career individual distance World Cup podium. Canadian skaters will get another chance to race at home as the World Cup circuit remains in Calgary for the coming weekend.

Marielle Thompson and Hannah Schmidt got their World Cup seasons off to a great start, each winning a silver medal in the first two women’s ski cross races of the winter in Val Thorens, France. It was the first ever World Cup podium for Schmidt while it was number 53 for Thompson. India Sherret finished fourth in Schmidt’s final.

Ski jumping: Another near podium for Abigail Strate 👀

Another weekend, another fourth place finish for Abigail Strate. After posting the best World Cup result by a Canadian ski jumper in seven years last week in Lillehammer, Strate followed up with another near podium in Titisee-Neustadt, Germany. This time, it was on the large hill as she totalled 255.0 points to be 3.1 points shy of the bronze medal.

Strate was a member of the Canadian ski jumping team that made history at Beijing 2022, winning the bronze medal in the Olympic debut of the mixed team event.

There was a breakthrough performance for the new generation, while Canada’s most successful doubles luge team slid into retirement.

Devin Wardrope and Cole Zajaski slid to a career-best fourth-place finish at the FIL Luge World Cup on Saturday in Whistler. Competing in their seventh World Cup race ever, the pair (who are just 20 and 21) narrowly missed the podium with a time of 1:16.763.

In the women’s competition, two Canadians made a bit of history of their own. Caitlin Nash and Natalie Corless became the first Canadians to compete in women’s doubles racing on the World Cup circuit. The 19-year-olds finished sixth with a two-run time of 1:18.526. The event will make its Olympic debut at Milano Cortina 2026.

Meanwhile, Olympic silver medallists Tristan Walker and Justin Snith said goodbye to the sport in which they’ve had so much success. They took one final run together as forerunners on the home track at the Whistler Sliding Centre — the same place where they made their first of four Olympic appearances in 2010.

“I think something like this is bittersweet,” said Walker. “We are both moving on to things we are both excited about, so it feels right. But it’s definitely a little bit sad too. It feels like it is time.”

In her first international competition competing in the 59kg event, Maude Charron won bronze at the IWF Weightlifting World Championships in Bogota, Colombia. Charron broke Canadian records in the snatch (103kg), clean and jerk (128kg), and overall weight (231kg) to stand on the podium.

Skylar Park concluded 2022 with a return to the podium. She won bronze in the -57kg category at the World Taekwondo Grand Prix Final in Riyadh, Saudi Arabia.

Park received a bye through the round of 16. With a 2-0 quarterfinal victory against Poland’s Patrycja Adamkiewicz, Park advanced to the semifinals. In a close fight against Turkey’s Hatice Kubra Ilgun, Park fell 0-2 to the second seed and went on to face Morocco’s Nada Laaraj in the bronze medal match. Park scored a headshot to take the first round and maintained an aggressive approach throughout the second round to win the match 2-0.

Fiji’s Reapi Ulunisau scored in the opening minute and added another try in the sixth minute to help her team to a 14-0 lead. Olivia Apps cut the Fijian lead in half with a try and conversion just before the end of the first half. The Canadians came within two points of tying the match after Shalaya Valenzuela scored a try in the 10th minute, but successive tries from Fiji sealed the result.

Katherine Stewart-Jones, Antoine Cyr, Dahria Beaty, and Olivier Léveillé raced to a top-10 finish in the mixed 4x5km relay event at the FIS Cross-Country World Cup in Beitostolen, Norway. The team finished in eighth place with a time of 55:40.5.

Alexanne Verret made a big breakthrough on home soil, winning her first career FIE World Cup medal in Vancouver. She finished with a bronze medal in the women’s individual epée. Verret is the highest ranked Canadian in women’s epée, currently sitting at number 34 in the world.