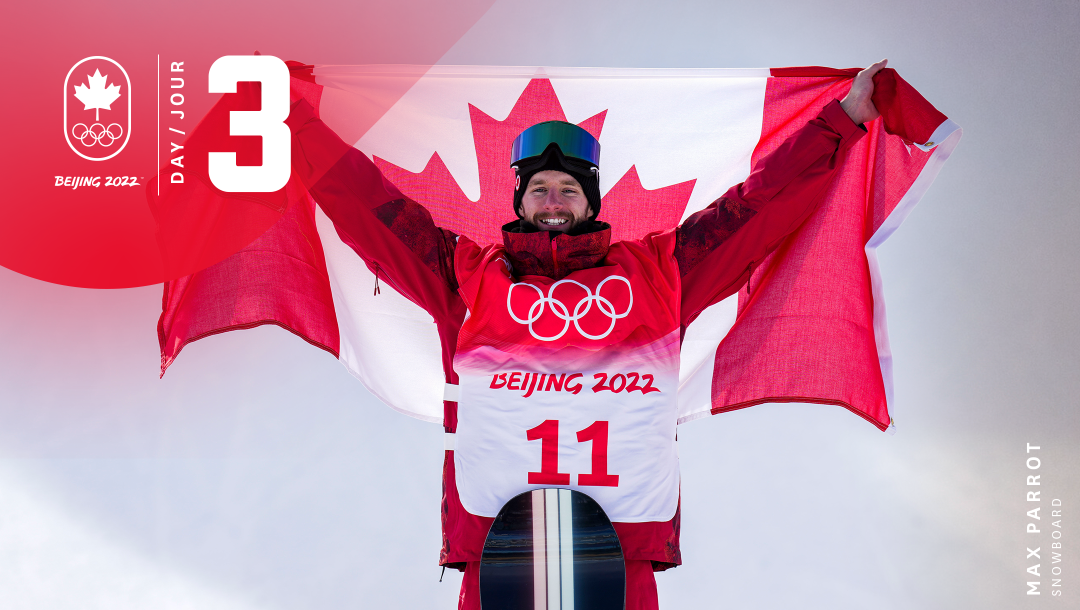 Here’s what you need to know about what happened on Day 3 at Beijing 2022.

Max Parrot won Canada’s first gold medal of Beijing 2022 and for the second straight Games, he shared the slopestyle podium with teammate Mark McMorris, who won his third straight bronze medal in the event. Parrot scored 90.96 points on his second of three runs, while McMorris came through with a clutch final run to climb onto the podium with 88.53 points. He finished just 0.17 out of the silver medal position. Canada’s third man in the final, Sébastien Toutant, place ninth.

Kim Boutin won her second straight Olympic medal in the 500m, bringing her career total to four. That ties her as Canada’s most decorated female short track speed skater. Alyson Charles made it to the B final as she finished eighth overall. Florence Brunelle was penalized during her quarterfinal heat.

In the men’s 1000m, Jordan Pierre-Gilles was penalized in the quarterfinals while Pascal Dion did not record a time after falling in his quarterfinal.

Mackenzie Boyd-Clowes, Matthew Soukup, Alexandria Loutitt and Abigail Strate won the bronze medal in the inaugural mixed team event at the Olympic Winter Games. That was one for the history books as the quartet won Canada’s first ever Olympic medal in ski jumping.

Jack Crawford was impressive in the men’s downhill as he finished fourth, just 0.07 out of the bronze medal position. It was Canada’s best Olympic result in the men’s downhill since Edi Podivinsky won bronze at Lillehammer 1994. Brodie Seger placed 22nd while Broderick Thompson did not finish after losing an edge, but he was not injured.

Valérie Grenier and Cassidy Gray competed in the women’s giant slalom but neither woman was able to finish the first run. Grenier had the finish line in site when she missed a gate.

Rachel Homan and John Morris have been eliminated from the mixed doubles tournament. In a must-win game against Italy, they missed scoring in an extra end by mere millimetres. With a 5-4 record, they were tied for fourth in the standings with Sweden, but the Swedes got the last semifinal spot because they defeated the Canadians earlier in the round robin.

Canada finished the final day of the team event as it came in, in fourth place. Canada ended up with 53 points, 10 points behind Japan for the bronze medal. Piper Gilles and Paul Poirier placed third in the free dance, Madeline Schizas was third in the women’s free skate, while Vanessa James and Eric Radford were fourth in the pairs free skate.

Ivanie Blondin and Maddison Pearman raced in the women’s 1500m at the Ice Ribbon. Blondin placed 13th while Pearman finished 24th in her Olympic debut.

It was qualification day for the big air event at the spectacular Big Air Shougang venue in Beijing. In qualification, all skiers did three runs with just their two best scores counting towards determining the top 12 that advance to the final.

Megan Oldham finished atop the women’s qualification standings with 171.25 points. Olivia Asselin also made it through in 11th place. Only one of the four Canadians entered in the men’s event will be moving on. Evan McEachran finished 11th with 170.25 points. Missing out on the final by just one spot was world silver medallist Édouard Therriault. Max Moffatt placed 20th while Teal Harle was 31st.

After dominating double-digit goal performances against Switzerland and Finland, Team Canada took on Team ROC in women’s hockey. The start of the game was delayed as they worked through some COVID protocols. In the end, the Canadians came away with the 6-1 victory, keeping them undefeated as they prepare to face Team USA.

The first two runs of women’s singles took at the Yanqing Sliding Centre. Trinity Ellis sits in 13th place, Makena Hodgson is 15th and Natalie Corless is in 17th heading into the last two runs.