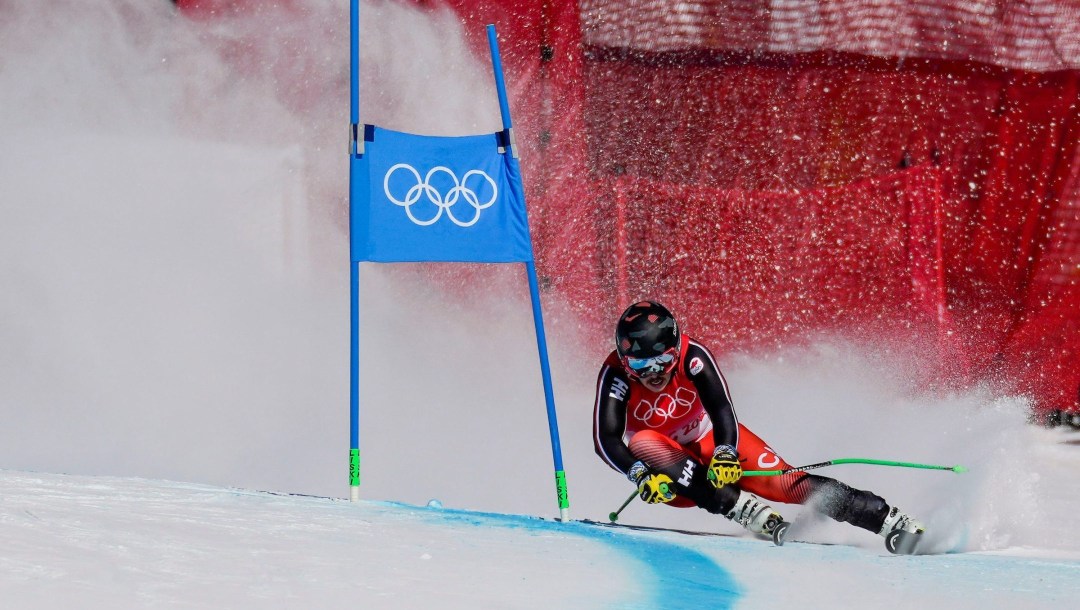 Get ready to cheer on Team Canada’s stars of the snow sports.

The 2022-23 World Cup season is underway for our skiers and snowboarders. Many athletes who competed at Beijing 2022 are ready to show their stuff against the world once again. But not everyone is back, as the summer off-season saw its share of notable retirement news.

To help set you up with what to watch in the coming months, here’s a sport-by-sport breakdown of alpine skiing, cross-country skiing, freestyle skiing, ski jumping, and snowboard – including when and where you can catch your favourite Canadian athletes in action at home.

After competing at her fourth Olympic Games, slalom specialist Erin Mielzynski announced her retirement in April, bringing to an end her nearly 15-year career with the national team.

The Canadian Women’s Alpine Ski Team will be part of some history this season. Karin Harjo will be the first ever female head coach on the FIS World Cup circuit. Racers she will be guiding include Olympians Marie-Michèle Gagnon, Cassidy Gray, Valérie Grenier, Ali Nullmeyer, Amelia Smart, and Laurence St-Germain.

Gagnon finished in the top-10 in both slalom and downhill at Beijing 2022, showing her versatility across the technical and speed events, while Nullmeyer earned her first career top-five World Cup finish in a slalom race in January. They and the other technical skiers on the women’s team — including Grenier, St-Germain, and Smart – will be looking to build on last season’s momentum.

Olympic bronze medallist Jack Crawford is among the members of the men’s alpine team who will look to build on their breakthrough success last season. He followed up his historic Olympic podium performance in the alpine combined with his first career World Cup medal, taking super-G silver in Kvitfjell. He also posted two other top-five finishes in the super-G.

On that same March weekend in Kvitfjell, Cameron Alexander sped to the gold medal in the downhill for his first career World Cup podium. Back at the start of the 2021-22 season, it was Broderick Thompson who earned his first career World Cup podium, taking super-G bronze in Beaver Creek. The men’s speed team will kick off their season at home in Lake Louise following the cancellation of races in Zermatt, Switzerland at the end of October.

Two members of the 2022 Olympic team, Cendrine Browne and Laura Leclair, have decided to retire from competitive cross-country skiing. Browne goes out on the high note of earning Canada’s best ever Olympic result in the 30km free mass start.

On the men’s side, Rémi Drolet is stepping back from the World Cup scene as he returns to Harvard University but will still be an active athlete.

There is so much potential among the young Canadian men who will compete on the World Cup circuit this season. Antoine Cyr and Graham Ritchie, who both just turned 24 in September, produced a Canadian best-ever fifth-place finish in the men’s classic team sprint at Beijing 2022. They’ll look to build on that momentum throughout the winter before heading to what will be just their second senior world championships.

Also looking to continue his rise will be 21-year-old Olivier Léveillé, who was a bronze medallist at the 2021 FIS World Junior Championships before he made his Olympic debut in five events.

Don’t be surprised if you hear the name Xavier McKeever this season. At 19, he is one of Canada’s top prospects. Both parents – Milaine Thériault and Robin McKeever – are Olympians in cross-country skiing and his uncle is the legendary Brian McKeever, Canada’s most decorated Paralympian. His focus will be the junior worlds taking place in Whistler, but a call up to the World Cup circuit might not be too far behind.

On the women’s team, Dahria Beatty and Katherine Stewart-Jones are the holdovers from Beijing. Following a great fall training camp, they are optimistic for some breakthroughs this season.

The most notable departure from the Freestyle Canada national team is Chloé Dufour-Lapointe. After becoming the first female Canadian freestyle skier to compete in four Olympic Games, she announced in September that it was time to hang up her moguls skis. The middle of the three Dufour-Lapointe sisters, Chloé had competed on the World Cup circuit since the 2007-08 season and memorably won the Olympic silver medal in moguls at Sochi 2014. Fellow mogulist Laurent Dumais has also decided to retire after making his Olympic debut at Beijing 2022.

Mikaël Kingsbury added to his massive collection of Crystal Globes last season, but he would happily make room for more on his mantle. Kingsbury has been the most consistent moguls skier in the world for the last decade, but who knows what new tricks the GOAT might pull out of his back pocket?

In moguls, also keep an eye out for Brendan Kelly, Gabriel Dufresne, and Maïa Schwinghammer who are hoping to take that first step onto a World Cup podium.

All six members of Canada’s Olympic aerials team are back, including the trio that won bronze in the first Olympic mixed team aerials event: Marion Thénault, Miha Fontaine, and Lewis Irving. These aerialists may still be young, but after some great progress this summer, they’re ready to reboot the glory days of the Quebec Air Force. Speaking of which, Nicolas Fontaine – who was the overall World Cup champion four times and is Miha’s father – has joined the national team as a fulltime coach, bringing his wealth of expertise.

The halfpipe national team also includes six Olympians, including Beijing 2022 medallists Cassie Sharpe and Rachael Karker, as well as veterans Noah Bowman, Simon d’Artois, and Brendan Mackay. In addition to competing in select World Cups, many of them will likely receive invites to the Winter X Games. Do keep an eye out for Andrew Longino who won gold at the 2020 Winter Youth Olympic Games but couldn’t compete last season after injuring his shoulder in October. He is back to performing his regular degree of difficulty.

There are also lots of bright young lights on the slopestyle/big air team. Olympians Megan Oldham and Olivia Asselin form a formidable duo while Elena Gaskell will be taking the season off to fully recover from surgery for a torn ACL she suffered in Beijing before she could make her Olympic debut. Meanwhile, the Canadian men are so strong that on any given week, any one (or two or three) of them could end up on the podium. Such was the case with NextGen athlete Noah Porter MacLennan who won big air silver at the World Cup opener in Chur, Switzerland in late October.

One of the founding members of the ski cross national team, Chris Del Bosco, has decided to represent the United States where he was born and raised. He had competed at three Olympic Games, starting with his discipline’s debut at Vancouver 2010.

Seven of the eight members of the 2022 Olympic team are definitely expected back on the World Cup this season. That includes 2018 Olympic champion Brady Leman and two-time Olympic medallist Marielle Thompson.

Unfortunately, 2018 Olympic silver medallist Brittany Phelan recently ruptured her right Achilles’ tendon while doing some gym training. No stranger to coming back from injuries, she has undergone surgery. Rehab will be the next step, but she isn’t ready to write off her World Cup season yet.

Canada is considered one of the powerhouse countries in ski cross At Beijing 2022, all four Canadian women reached either the big final or small final, as Thompson won silver and Phelan, Courtney Hoffos, and Hannah Schmidt placed fifth through seventh.

Three of the four ski jumpers who made history at Beijing 2022 by winning Canada’s first ever Olympic medal in their sport will be looking forward to competing on the World Cup circuit this season. The exception is Matthew Soukup, who has decided to take a bit of a break after hitting that high note in February.

Abigail Strate was racking up the wins in summer Continental Cup events. She earned two victories in Lillehammer in early September and then three more in Lake Placid in early October. Among the jumpers she defeated was the reigning Olympic silver medallist in the individual women’s event. Strate will aim to carry that momentum into the World Cup events when they start in early November.

Alexandria Loutitt could unfortunately have bit of a delayed start to her season. After recovering from knee surgery, she tore a ligament in her foot in a training session in early September, but took her first jumps in late October. Loutitt is aiming to compete in front of the home crowd at the FIS World Junior Championships in Whistler in early February. She won bronze at last year’s world juniors.

Mackenzie Boyd-Clowes has been competing at the top international level for more than a decade but that hasn’t dampened his drive to keep flying farther.

An annual highlight on Boyd-Clowes’ calendar is the Four Hills Tournament over the holiday season at the end of the year. At the same time, the women have the Silvester Tournament which is building towards having the same level of prestige. It all leads up to the world championships in late February. Those are taking place in Planica, Slovenia which has become a home-away-from-home for the Canadian team who continue to have their training base there.

Four longstanding national team members and Olympians have retired. Kevin Hill and Tess Critchlow are leaving the world of snowboard cross behind while Sébastien Beaulieu and Jennifer Hawkrigg are departing from the alpine team.

With three Olympic appearances and two X Games medals among his accomplishments, Hill had enjoyed a prolific career. Critchlow had one of her best ever performances in Beijing where she placed sixth in women’s SBX. Beaulieu had been with the national team since 2009 while Hawkrigg achieved her childhood dream of becoming an Olympian.

Sébastien Toutant, the 2018 Olympic champion in men’s big air, has also stepped away from the national team umbrella, as have Brooke Voigt and Zoe Bergermann.

Despite all the departures, the national team is still stacked with talent.

Olympic medallists Max Parrot (who became a father this past spring), Mark McMorris, and Laurie Blouin are expected to be as good as they have ever been in slopestyle and big air. One younger team member to keep a close eye on is Liam Brearley. The 19-year-old won three medals at the 2020 Winter Youth Olympic Games and is ready to make his big breakthrough on the senior international stage.

The halfpipe team is also quite young with the likes of 21-year-old Elizabeth Hosking, 19-year-old Liam Gill, and 17-year-old Brooke D’Hondt, but they will bring their Olympic experience with them on the World Cup circuit.

On the racing side of things, Eliot Grondin will look to continue his rise up the SBX ranks after winning Olympic silver and multiple World Cup medals last season. His Olympic bronze medallist teammate Meryeta O’Dine will also be seeking further success. In alpine snowboard, Megan Farrell has shown steady improvement and would love nothing more than to stand on her first World Cup podium in PGS.